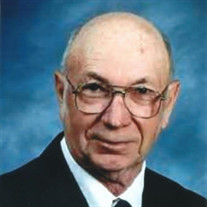 Dateline: Moro William C. Klunk died, at age 85, on June 13, 2021 from pneumonia. Most folks called him Bill. His grandchildren and immediate family call him PaPa. He was born on August 11, 1935 and raised in a primitive log home on French Hollow Road in Hardin, IL. Bill lived in Moro for 62 years. He graduated from Dejerlia School in Hardin. Bill practiced Roman Catholic beliefs all his life. Bill never intentionally missed a Sunday service and faithfully attended weekly mass at Our Lady Queen of Peace Catholic Church in Bethalto, IL. He will be best remembered as a very quiet, humble, patient, and talented person. Helping others was how Bill got his greatest gratification throughout life. On July 4, 1953, Bill met his true love for the first time at the company picnic. He could not take his eyes off of her sitting there on a wooden Coke bottle crate. She had flaming red hair and hazel-green eyes. Bill approached Bettie Rose Hurst just before the fireworks began that evening, and a 56 year legacy was started. Bettie married Bill on Oct. 12, 1953. They had three sons: William J. (Billy), Mark A., and Jeffery Lee (Jeff) Klunk. Bettie died on April 18, 2009. Bill was employed by Owens-Illinois Glass Works Company Plant #7 for about 33 years. He started by sweeping floors and worked his way through several positions to eventually attain the Forming Department “D-shift” Foreman position for many years. He operated and managed automated glass-blowing machines on both the “Forming” and “Flow” ends of production. Bill retired in 1984 due to the Alton Plant shutdown. Bill built from scratch and operated a sawmill for about 30 years after retirement from the glassworks. He was also a master mechanic on farm machinery, automobiles, and small engines. Bill loved to tinker with anything from watches to bulldozers. He was also an avid carpenter, cabinet maker, welder, and builder. He was always helping a neighbor, friend, or his boys with their own endeavors. He enjoyed spending time most with his family, eating regularly at Jeff’s house or the Eagles Nest Restaurant, and swapping stories with his McDonalds’ coffee club friends and previous co-workers. Bill was preceded in death by his parents: William F. and Margaret (nee Hazelwonder) Klunk, wife Bettie (nee Hurst), son: Mark, daughter-in-law: Jody (nee Klingelhoefer) Klunk, sister and brother-in-law: Eileen and Cletus Godar, sister: Lorraine Lumley, sister and brother-in-law: Elly and Lawrence Cunningham, sister and brother-in-law: Betty and Norman Hubbard. Bill is survived by his sons: Billy (Mary Ann) and Jeff (Deborah), grandchildren: Theresa (Andy) Mosby, Hannah Klunk, and Sarah Klunk, all of Moro, IL. He is also survived by a brother: Bob (Wanda) Klunk of Godfrey, brother-in-law: Alva Lumley of Godfrey, sister-in-law: Alice Hurst of Richmond, Va., and sister-in-law Joy Hurst of Logan Ut., and many Klunk and Hurst nieces and nephews, good friends, and dear neighbors. Visitation will be on Wednesday, June 16, 2021 from 5 to 7 pm at Elias, Kallal and Schaaf Funeral Home in Bethalto, where services will be held on Thursday, June 17, 2021 at 10 am with Father Tom Liebler officiating. Burial will follow at Rose Lawn Memory Gardens in Bethalto. Memorials can be made to Our Lady Queen of Peace School. Online condolences and guest book may be found at www.eliaskallalandschaaf.com

Dateline: Moro William C. Klunk died, at age 85, on June 13, 2021 from pneumonia. Most folks called him Bill. His grandchildren and immediate family call him PaPa. He was born on August 11, 1935 and raised in a primitive log home on French... View Obituary & Service Information

The family of William C. Klunk created this Life Tributes page to make it easy to share your memories.

Send flowers to the Klunk family.