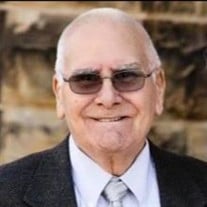 Dateline: Hardin William Kenneth Collins, 79, died on Sunday, February 7th, 2021 at Alton Memorial Hospital. He was born in Jerseyville, IL., on December 15, 1941, and was the son of Edward Collins and Gretchen (Waters) Collins. He was raised in Jerseyville and graduated from Jersey Community High School. He married his soulmate, Mildred Ann Cope of Jerseyville on February 13th, 1965. “Willy”, “Bill”, served in the Army before starting several careers. He worked at his family business, Collins Salvage and Jersey County Grain. He retired from Emersen Electric as an over the road truck driver where he enjoyed traveling the country and taking photos of his expeditions. He and Mildred (Millie) were blessed with a family they raised in Hardin, IL, consisting of their three children, and later grandchildren and great grandchildren. He was always an entertainer with his jokes, stories, and a grin that would put anybody in a good mood. Through the years, he enjoyed fishing, watching racing and other sports. His favorite pastime was socializing with friends over a warm cup of coffee or Diet Coke. He will be remembered by all as being a devout family man who was proud of those that he had raised. Bill gave in death as he gave in life, generously being ten-year volunteer for “Big Ed’s Run” and an organ/tissue donor. Surviving are his children Ruth (Collins) and Gary Tepen of Jerseyville, Kenny Collins and partner Jonna Stelbrink of Hardin, and Claude and Pat Collins of Hardin; grandchildren Lyndsi and Derek Sievers, Garrett and Alexis Tepen, Claude David Raddatz, Maggie Raddatz, and Mackenzie Collins; great grandchildren Elliott Sievers, Elijah Sievers, Lily Mae Raddatz, Vera Tepen, and two additional on the way; two sisters Mary Mcbride and Judy Collins; along with multiple close nephews and a niece. In addition to his parents, he was preceded in death by his wife Mildred Ann Cope and brother Thomas Collins. Visitation will be Saturday, February 13, 2021 from 9:00 to 10:00 A.M. at Gress, Kallal, and Schaaf Funeral Home in Hardin. Funeral service will Saturday February 13, 2021 at 10:00 A.M. at Gress, Kallal, and Schaaf Funeral Home in Hardin. Burial will follow at Valhalla Cemetery in Godfrey, IL. Memorials may be made to American Cancer Society or American Kidney Foundation. Gress, Kallal, and Schaaf Funeral Home of Hardin is handling arrangements.

Dateline: Hardin William Kenneth Collins, 79, died on Sunday, February 7th, 2021 at Alton Memorial Hospital. He was born in Jerseyville, IL., on December 15, 1941, and was the son of Edward Collins and Gretchen (Waters) Collins. He was raised... View Obituary & Service Information

The family of William K. Collins created this Life Tributes page to make it easy to share your memories.

Send flowers to the Collins family.