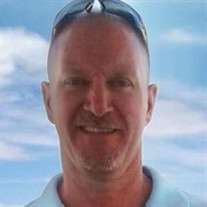 Dateline: Godfrey, Illinois William “Bill” Keith Hert, 56, passed away at home on Tuesday, April 12, 2022 surrounded by his loving family. He was born on March 9, 1966 in Killen, TX to Norma (Crowder) Hert-Cutt. She survives. He married Karen Strubberg on May 6, 2016 in Jerseyville, IL. She survives. Bill worked as a Director of Maintenance for Granite City Nursing and Rehabilitation. He was a member of Faith Lutheran Church in Godfrey. He proudly served in the United States Navy and was an avid sports fan supporting the St. Louis Cardinals, St. Louis Blues and the Green Bay Packers. Above all, he loved his family. In addition to his wife and mother, Bill is survived by a daughter, Bailey Hert of Depere, WI; a stepdaughter, Destiny Holder of Jerseyville, IL; two sisters, Dawn (Kyle) Kennedy of Godfrey, IL and Angel (Mark) Goodman of Godfrey, IL; four nieces and nephews, Hunter and Grace Goodman, and Sydney and Sawyer Kennedy of Godfrey, IL as well as many aunts, uncles, extended family members and good friends. He was preceded in death by a son, Chase Hert; a stepfather, Danny Cutt; a grandfather, Tom Crowder; a grandmother, Betty Crowder and a stepson, Timothy David Holder. Visitation will be Tuesday, April 19, 2022, 4:00 pm - 7:00 pm at Elias, Kallal & Schaaf Funeral Home in Godfrey, IL. Funeral services will be held Tuesday, April 19, 2022, 7:00 pm at the Elias, Kallal & Schaaf Funeral Home in Godfrey, IL. Memorials are suggested to Grief Share of Faith Lutheran Church in Godfrey, IL.

The family of William "Bill" Keith Hert created this Life Tributes page to make it easy to share your memories.

Send flowers to the Hert family.