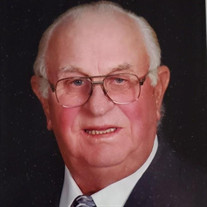 Dateline: Golden Eagle Walter A. Kinder, Jr. of Golden Eagle, IL, passed into eternal life peacefully with family by his side on April 28, 2022, at San Gabriel Memory Care in Godfrey. Walter, aka Sonny or Grump, was born on February 14, 1938, on the family farm where he lived his entire life. He was the son of Walter Sr. and Rose (Topmeyer) Kinder. On July 8, 1961, he married Geraldine (Bick) Kinder at St. Barbara’s Church in Batchtown. Sonny worked the family farm alongside his father, until his passing, his wife, and later his son and grandsons. He loved being a farmer and his IH tractors. He enjoyed socializing at the local businesses and made many friends along the way. Sonny is survived by his wife, Gerry, of 60 years, daughters, Michelle ‘Shelley’ Kinder and Susan (Dave) Kennedy of St. Charles, MO and one son, Bruce (Patti) Kinder of O’Fallon, MO. Grandchildren are Bethany (Mike) Wittman of Jerseyville, Lindsay (Cody) Welsh of Marshall, IL, Justin (Niki) Kennedy of St. Peters, MO, Kyle and Blake Kinder of O’Fallon, MO. Great grandchildren are Piper and Henry Wittman, Vivienne and Van Welsh, and Laci Kennedy. Preceding him in death were his parents and sisters Helen (Tony) Schulte, Doris (Fred) Weishaar (Ray Praul), and Virginia (Jerome) Rose. Walter graduated from Brussels Community High School in 1956. He served on the Brussels School Board and on the Calhoun County Farm Bureau. Visitation will be Wednesday, May 4, 2022, from 4-7 pm at Gress, Kallal, and Schaaf Funeral Home in Brussels, IL with funeral services on Thursday, May 5th, 2022, at 10:00 a.m. at St. Matthew’s Lutheran Church in Brussels officiated by Pastor Robert Weise. Interment in St. Mary's Catholic Cemetery, Brussels, Illinois, with Father Don Roberts and Pastor Bob Weise officiating. Memorials can be made to the Golden Eagle Youth Trap Team, Francis Pohlman American Legion, or the St. Mary School. Special thanks to San Gabriel Memory Care Center in Godfrey, IL, and Vitas Hospice for their devoted care to Walter.

Dateline: Golden Eagle Walter A. Kinder, Jr. of Golden Eagle, IL, passed into eternal life peacefully with family by his side on April 28, 2022, at San Gabriel Memory Care in Godfrey. Walter, aka Sonny or Grump, was born on February 14, 1938,... View Obituary & Service Information

The family of Walter A. Kinder Jr. created this Life Tributes page to make it easy to share your memories.