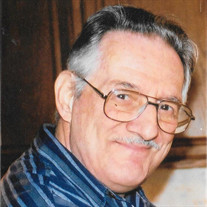 Walter Richard (Dick)Witt(84) of Alton passed away peacefully with family by his side at Alton Memorial Hospital. Dick was born on 12/11/37 in Eldred, Illinois. He graduated from Jerseyville High School in 1956 and went on to be a machinist/mold maker for 34 years at Owens-Illinois Glass Company. He married Evelyn Serge on June 20, 1959. They had 3 children, Rick(Brenda)Witt of Roodhouse; Sandy Witt of Alton, Mark(Randy Ploeg) Witt of Waterloo. He had two grandchildren, Danny (Deb)Piper of Chatham and Sami (Jared) Dixon of Murrayville, as well as two great-grandchildren, Brock and Ruby Dixon. He was an avid bowler for many years. After his retirement, he enjoyed watching old westerns, spending time drinking coffee with his friends and walking at the mall. He loved a good joke, and kidding with everyone was a “Dick” trademark. His smile and quick wit will be missed by all who knew him. His greatest love was spending time with his family. Dick was preceded in death by his parents Walter H. Witt and Virginia Green. He is survived by his beloved wife, children and grandchildren, along with his sisters, Ramona Abbott of Orlando, Florida; Kathy (Kent) Myers of New Canton, Illinois and a brother, Terry Witt of Jerseyville, Illinois as well as many nieces, nephews and cousins. Family will receive guests in the community hall on Saturday, March 19, 2022 from 9:00 am until the time the Mass of Christian Burial at 10:00 am at St. Ambrose Catholic Church with Fr. Steven Janosky officiating. The burial of his ashes will take place at a later date. Memorials are suggested to St. Ambrose Catholic Church, The Salvation Army, or Madison County Catholic Charities. Elias, Kallal and Schaaf Funeral Home in Alton will oversee arrangements.

Walter Richard (Dick)Witt(84) of Alton passed away peacefully with family by his side at Alton Memorial Hospital. Dick was born on 12/11/37 in Eldred, Illinois. He graduated from Jerseyville High School in 1956 and went on to be a machinist/mold... View Obituary & Service Information

The family of Walter "Dick" Witt created this Life Tributes page to make it easy to share your memories.

Send flowers to the Witt family.