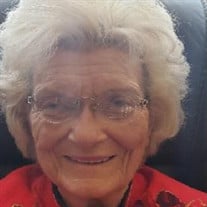 Dateline: Wood River, IL Virginia D. Kirkpatrick, 92, of Wood River, IL and the Founder of Operation Blessing passed away on Sunday, April 11, 2021 at 10:32 pm at Oak Hill Senior Living and Rehabilitation in Waterloo, IL. She was born on October 11, 1928, the daughter of Russell and Isadora (Evans) French. On April 6, 1947 Virginia married Ned Kirkpatrick at the Alton 1st Christian Church. He preceded her in death on December 17, 2009. Virginia was the volunteer executive director of Operation Blessing. She impacted thousands of community members in need through the not-for-profit organization she founded with her late husband, Ned, with just $500. She said she was inspired to make a change because of the many first-hand accounts she heard from people “in dire need” of resources after Owens-Illinois Glass Co. shuttered years ago. With her family out of town her husband for work and children for school she decided to get to work, collecting clothes and food from community members to disperse where needed, evolving the initiative since March 1, 1982. Operation Blessing operated out of two other facilities before moving to a multi-purpose building on Lorena Avenue and has been operating there since 1996. Over the years, Virginia has helped provide an estimated four-million meals, averaging out to about 100,000 meals per year. She is survived by her children, Barbara Burk (Jim) of Houston, TX, Teresa Kirkpatrick of Wood River, and Ted Kirkpatrick of Waterloo, IL; 14 grandchildren, Rich Kirkpatrick (Angie), Terry Kirkpatrick (Kerri), Mike Burk, Kimberly Burk Farschchi (Farshid), Chris Burk, Kelly Burk, Dustin Kirkpatrick (Fiancée, Aliesha), Jenna Kirkpatrick Barrow (Seth), Shane Kirkpatrick, Cassie Kirkpatrick, Megan Kirkpatrick (Fiancée James Luecke), Sean Kirkpatrick, Kelsey Kirkpatrick and Katie Kirkpatrick; 12 great-grandchildren, Kayla Kirkpatrick Price (Blake), Kyle Kirkpatrick (Fiancée, Lindsey), Ira, Nathan, Hayden, Lexi, Cooper, and Dylan Kirkpatrick, Savannah and Kendall Barrow, Cyrus and Darius Farshchi; a great-great-grandchild, Jack Price; and a daughter-in-law, Denise Kirkpatrick. Along with her husband, Ned; she was preceded in death by her sons, Larry, Hank and Mark Kirkpatrick. A visitation will be held on Sunday, April 18, 2021 from 1:00 pm until 5:00 pm at Elias Kallal and Schaaf Funeral home in Bethalto, IL. Funeral Services will be held on Monday, April 19, 2021 at 10:00 am at the Funeral Home. Burial will take place at Rose Lawn Memory Gardens in Bethalto. Memorials may be made to Operation Blessing. Online condolences and guest book may be found at www.eliaskallalandschaaf.com

Dateline: Wood River, IL Virginia D. Kirkpatrick, 92, of Wood River, IL and the Founder of Operation Blessing passed away on Sunday, April 11, 2021 at 10:32 pm at Oak Hill Senior Living and Rehabilitation in Waterloo, IL. She was born on... View Obituary & Service Information

The family of Virginia D. Kirkpatrick created this Life Tributes page to make it easy to share your memories.

Send flowers to the Kirkpatrick family.