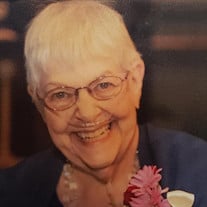 Dateline: Moro Virginia “Ginny” M. Doolen, 80, of Moro, passed away on Tuesday, October 26, 2021, at Alton Memorial Hospital. She was born in St. Louis, MO, on July 29, 1941, the daughter of the late Kermit and the late Frieda (Miller) Diebold. She married Dennis M. Doolen on August 28, 1965, in St. Louis. He preceded her in death on October 22, 2001. Ginny was a registered nurse for Staunton Memorial Hospital and then around the area to finish her career. She was of the Catholic faith and a member of Our Lady Queen of Peace Catholic Church in Bethalto. Ginny enjoyed taking an Arthritis Aquatics class at the YMCA, having “Lunch Bunch” with her friends, crocheting, reading, and spending time with her family and friends. Ginny loved to laugh! Survivors include her three children, Kelly (Royal) Baird of Edwardsville, Theresa (David) Newell of Seattle, WA, and Dennis “DJ” (Katie) Doolen of Humble, TX; three siblings, Barbara Diebold of St. Louis, Marilyn (Ken) Cottin of St. Louis, and Gerry Diebold of St. Peters, MO; seven grandchildren, Karly (Roger) McDonald, Racheal Newell, Benjamin Newell, Sam Newell, Ashleigh Doolen, Kelsie (Payden) Seals, and Zachary (Megan) Doolen; two great-grandchildren, Annabelle and Nikolai; and numerous nieces, nephews, cousins and friends. Visitation will be held on Sunday, October 31, 2021, from 2pm to 5pm at Elias, Kallal and Schaaf Funeral Home in Bethalto. Mass will be held on Monday, November 1, 2021, at 10am at Our Lady Queen of Peace Catholic Church in Bethalto, with Father Tom Liebler as celebrant. Burial will follow at Valley View Cemetery in Edwardsville. Memorials can be made to Catholic Charities. Online condolences and guest book may be found at www.eliaskallalandschaaf.com

The family of Virginia "Ginny" M. Doolen created this Life Tributes page to make it easy to share your memories.

Send flowers to the Doolen family.