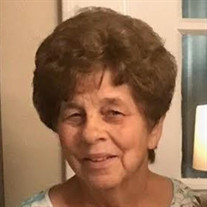 Virginia “Ginny” Abbott, age 81, of Alton, went to be with the Lord Saturday, February 13, 2021 at Fountain View Manor Memory Care in Granite City. She was born April 7, 1939 in Alton the daughter of Ira and Cecil (Gates) Markel. She graduated Alton High School in 1958. Ginny married Edgar “Dink” Abbott on February 5, 1974 in Alton and he survives. Ginny had worked at many places, but then retired from the Alton School District in 2004 after 19 years as a delivery driver. She was a lifetime member of Brown Street Baptist Church. Ginny enjoyed spending time with her granddaughters. She enjoyed bowling, and the group of seniors she bowled with every week. Ginny was a very outgoing person. She liked everyone she met. Family celebrations were very important to her, especially during the holidays. Ginny liked camping, fishing, playing golf, and walking. In addition to her husband, Edgar “Dink”; she is survived by a daughter and her husband, Tracy and Adam Gordon of Brighton; two granddaughters, Audrey and Madelyn Gordon of Brighton; two sisters and a brother-in-law, Clara and Jerry Duncan and Dot Minks, both of Alton. She is preceded in death by her parents; four brothers, Gene Markel, Art Markel, Homer Markel, and Jack Markel; and one sister, Marie Markel. Visitation will be held Friday, February 19, from 4:00 to 7:00 PM at Elias, Kallal and Schaaf Funeral Home in Alton. Funeral services will be held Saturday, February 20, 2021 at 10:00 AM in the funeral home chapel with Pastor Greg Linscott officiating. Burial will take place in Rose Lawn Memory Gardens. Memorials may be made to Brown Street Baptist Church in Alton. Elias, Kallal and Schaaf Funeral Home is in charge of arrangements.

The family of Virginia “Ginny” Abbott created this Life Tributes page to make it easy to share your memories.

Send flowers to the Abbott family.