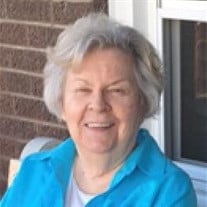 Vesta June Crawford, 90, passed away at 12:52 p.m. on Friday, August 20, 2021, surrounded by her 5 children. June was born on June 4, 1931, in Roxana, Illinois, to Archie Vest Fitzgerald and Virginia Allen (Scoggins) Fitzgerald. She married Glen Crawford on December 23, 1993. He preceded her in death on November 5, 2013. Previously, she was married to Taylor Eugene Hurley and Paul J. Cooke, both of whom predeceased her. June worked as a secretary and a librarian at Monticello College in Godfrey, later Lewis and Clark Community College, for many years. Following that, she was the administrative assistant to the president of the University of Georgia in Athens, Georgia. During her working years, she was a member of Professional Secretaries International (now called the International Association of Administrative Professionals), traveling the globe to organize conferences that heightened awareness of the importance of her profession. She earned her Certificate in Library Science in 1975 at LCCC. She was an enthusiastic promoter of the local Lions Club in Potwin, Kansas, where she lived for 20 years with her husband, Glen. And she spent her retirement years volunteering with Dress for Success, encouraging and educating women who were preparing for a new career. Her kindness and generosity left an indelible mark on all who knew and loved her. She was an avid reader (loved her historical romance novels and anything by John Grisham) and passed along that love to her children. Above all, June’s greatest joy was her family. June is survived by 5 children: Michael Hurley of Albuquerque, New Mexico; Sue Hurley of Alton, Illinois; Eve Hurley of Centerton, Arkansas; Melissa Chamberlin of Centerton, Arkansas; and Kimberly (Doug) Anderson of Mesa, Arizona; 3 grandchildren: Heather Hurley, Ashleigh Hurley and Kelly (Ressan) Ali; 2 great-grandchildren, Emma Rose and Bella; and a sister, Francis Stucker. Per her request, cremation rites were accorded. Elias, Kallal and Schaaf Funeral Home in Godfrey is entrusted with professional services. A private interment will take place at Wanda Cemetery at a later date. Memorials are suggested to the Alzheimer’s Assn., Hayner Public Library in Alton, Dress for Success or any Lions Club.

The family of Vesta June Crawford created this Life Tributes page to make it easy to share your memories.

Send flowers to the Crawford family.