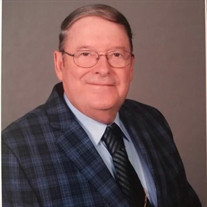 Dateline: Nixa, MO Thomas (Tom) E. Cox went to meet his Lord and Savior, peacefully at home, on February 27, 2022. Tom was born May 27, 1945 in Alton, Illinois, the son of Eugene and Eline (Davis) Cox. He married Elva Marie (Scogin) on July 1, 1967 at the East Alton Church of God. They enjoyed a wonderful 54 years of marriage. She survives. Tom served in the U.S. Army Reserves from 1965 to 1971. He worked for Wegman Electric 27 years, in positions ranging from electrician to Field Superintendent. He was a lifelong member of the IBEW Local Union 649. Tom enjoyed the time he spent with his two granddaughters and all of his family. He also enjoyed flying private aircraft in the late 1970s. Over the years, Tom and Elva were wonderful hosts to their extended family and graciously opened their home to those visits. In addition to his wife, he is survived by three sons and daughter in law, Mark and Faith Cox, Glen Carbon, Illinois, David Cox, Springfield, Missouri, and Jeremy Cox with Debbie and Eben, Brighton, Illinois and their granddaughters, Sarah Cox and Julia Cox Glen Carbon, Illinois, and brother James (Jim) and spouse Brenda Cox, sister-in-law Linda Cox, and sister Leona Cox. He is proceeded in death by his parents and two brothers, Ronald (Ronnie) and Gerald (Gerry) Cox. Visitation will begin at 9:30 a.m. until the time of the funeral services at 11:00 am on Saturday, March 5, 2022. Burial, with military honors, will follow at Rose Lawn Memory Gardens in Bethalto. Arrangements will be handled by Elias, Kallal and Schaaf Funeral Home in Bethalto, Illinois. Donations may be made to the SonLife Broadcast Network, Baton Rouge, Louisiana, or the American Red Cross and Bethalto Church of God.

The family of Thomas "Tom" E. Cox created this Life Tributes page to make it easy to share your memories.

Send flowers to the Cox family.