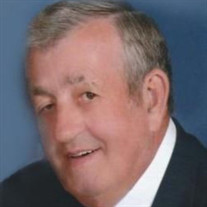 Dateline: Hardin Thomas Edward Lorsbach, 82, passed away at 1:16 a.m. on Wednesday, December 16, 2020 at Jersey Community Hospital. He was born on June 24, 1938, the son of John J. and Lucille G. (Dean) Lorsbach. He married Janet Pauline Sievers on April 22, 1961 at St. Barbara Catholic Church in Batchtown. She survives. Tuck was a graduate of Calhoun High School in 1958. After graduation, he attended St. Louis School of Automation. He worked at the Western, and later at Western Illinois Power Co-op (WIPCO) at the Pearl power plant for 32 years as a boil-maker. He retired in 2000. Tuck was a member of St. Norbert Catholic Church, St. Francis of Assisi Parish. During his lifetime, he served on the cemetery board and was an usher at masses. He was a Fourth Degree Knight with the Knights of Columbus #4417. He enjoyed bowling with the KC’s at Busch’s Bowling Lanes and playing slow pitch softball for many years. In retirement, you could find Tuck helping with Peter’s Tree Service, in his chair with a western book in his hand, canning garden vegetables, watching sports on TV, and traveling all over the place watching his grandkids play sports. But, throughout his life, his most cherished role was being a husband, dad, grandpa and great-grandpa. In addition to his wife of 59 years, he is survived by 3 children, Cheri (Curt) Peters of Hardin, Thomas (Becky) Lorsbach of Jerseyville, and Carrie (Gary) Baalman of Hardin. He is survived by 10 grandchildren, Greg Peters, David Peters, Aaron Peters, Jacob Baalman, Seth Peters, Jessica Baalman, Sydney Lorsbach, Kaleigh Lorsbach, Holly Baalman, and Ian Lorsbach. He shared a special bond with his 11 great-grandchildren, Addisyn, Nolan, Easton and Jett Peters, Brooklyn, Skyler, Conner and Tucker Peters, Jay and Sophie Peters, and Chase Baalman. Tuck is survived by siblings, Jim Lorsbach, Virginia Steckel, Rosie (Bob) Beatty, and many nieces and nephews. He was preceded in death by his parents, one sister, Julie Treis, and his brothers, Bill Lorsbach, Jack Lorsbach, Bob Lorsbach, and Chuck Lorsbach. Visitation and services will be private. Gress, Kallal and Schaaf Funeral Home in Hardin is in charge of arrangements. The Interment at St. Barbara Cemetery in Batchtown. Memorials are for St. Norbert School and Family Choice.

The family of Thomas E. Lorsbach created this Life Tributes page to make it easy to share your memories.

Thomas Edward Lorsbach, 82, passed away at...

Send flowers to the Lorsbach family.