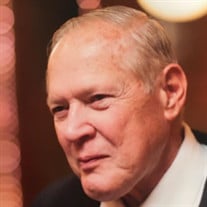 Theodore “Ted” F. Klasner, 80, of Godfrey passed away on Tuesday, May 25, 2021, at Christian Northeast Hospital. He was born in Alton, IL on September 4, 1940, the son of Walter A. and Josephine M. (Brinkoetter) Klasner. He married Patricia “Pat” Wendle at St. Mary’s Catholic Church in Alton on May 4, 1963. Ted was a graduate of Marquette Catholic High School, Ranken Trade School, and Lewis Clark Community College. He was a Veteran of the United States Army where he proudly served his country. He began a career with Olin Corporation in the Winchester Division as a Project Engineer, and later an independent contractor. His career spanned nearly 50 years with Olin Corporation. Ted was a remarkable man, serving his community, church, and family faithfully. He officiated high school and college soccer for over 40 years. He was a member of the Knights of Columbus, a parishioner, and Trustee for St. Ambrose Catholic Church. He served for the 1st Mid America Credit Union, first as a board member, and presently as Chairman of the Board for 25 years. In his “free time,” Ted could be found working at the neighborhood pool, watching the Cardinals or the Blues and cheering on his grandkids at their soccer and baseball games. Ted was a loving husband, father, and grandfather. His greatest joy in life came from helping and caring for others. Survivors include his wife, Pat; children, Thomas (Michelle) Klasner, Ann (Kyle) Klasner-Strange, Michael (Michaela) Klasner, David (Mary Vega) Klasner, Mary (Terry) Arnold and Matthew Klasner; his grandchildren, Jonah, Noah, Ryan, Amory, Haley, Hannah, Jack, Emerson, Grace, Ellie, Audrina, Carson and Audrina; great-grandson, Liam; and siblings, Bill (Jeanne) Klasner and Nancy Leritz. Along with his parents, he was preceded in death by his brother, Jim Klasner; and a grandchild, Elan Laxer Strange. Visitation will be on Friday, May 28, 2021, from 4 to 7 pm at Elias, Kallal and Schaaf Funeral Home in Godfrey. Funeral Mass will be held on Saturday, May 29, 2021, at 10 am at St. Ambrose Catholic Church in Godfrey. Fr. Steve Janoski will officiate. Burial will follow at St. Patrick’s Cemetery in Godfrey. Military rites will be accorded by Alton VFW Post 1308. Memorials may be made to St. Ambrose Catholic School and/or Marquette Catholic High School.

The family of Theodore "Ted" F Klasner created this Life Tributes page to make it easy to share your memories.

Send flowers to the Klasner family.