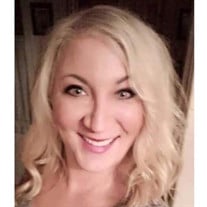 Teresa Ann Downey, 45, passed away Friday, March 18, 2022, at her home. She was born on March 27, 1976, in Alton, IL the daughter of Robert E. and Debra (Wendle) Barnard. Teresa held a Bachelor's Degree and worked as a counselor at Tri-County Counseling Center in Jerseyville providing crisis intervention and stabilization to children. Previously, she was employed as an Obamacare Navigator, a Behavior Health Technician at Gateway Hospital in Granite City, and had worked for many years at Castelli's Moonlight. Teresa was talented at everything she tried, including drawing, painting, and gardening. She enjoyed traveling and had just recently taken a fishing trip to Minnesota with her family. She enjoyed visiting her daughter in Colorado to “get lost in the mountains.” Teresa loved playing pool with her friends; she didn't know any strangers. Teresa was known for her compassion to her pets, including her cats, but her biggest love was her dog, Diva. Above all, her greatest joy was her grandchildren. In addition to her parents, Teresa is survived by her two children, Kyline Downey of Alton, and Tyler Downey, who is serving in the Armed Forces overseas; three siblings and their spouses, Joseph Robert and Samantha Barnard, Angela Marie and Christopher Turpin, and Danielle and Eric Wright; a maternal grandmother, Carol G. Carn; two grandchildren, Wyatt Richard Downey, and Nolan Woodrow Kohler, and was best aunt to many nieces and nephews. She was preceded in death by her grandparents, Melvin and Wilma Barnard and Gerald Wendle. Visitation will be held Thursday, March 24, 2022, from 4:00 pm until the time of service at 7:00 pm at Elias, Kallal & Schaaf Funeral Homes in Godfrey. Pastor Terry McKinzie will officiate. In lieu of flowers, memorials are suggested to the family in care of the funeral home to assist with final expenses.

Teresa Ann Downey, 45, passed away Friday, March 18, 2022, at her home. She was born on March 27, 1976, in Alton, IL the daughter of Robert E. and Debra (Wendle) Barnard. Teresa held a Bachelor's Degree and worked as a counselor at Tri-County... View Obituary & Service Information

The family of Teresa Ann Downey created this Life Tributes page to make it easy to share your memories.

Send flowers to the Downey family.