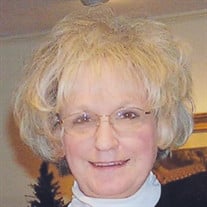 Dateline: Belleville Susan Margaret Stephan, age 76, of Alton, passed away Sunday, October 3, 2021, at Bria of Belleville with her family by her side. Born August 26, 1945, in Alton, she was the daughter of Harold H. and Alice (Zerwas) Horrell. Susan married Thomas E. Stephan on November 23, 1967, at SS. Peter and Paul Catholic Church and he preceded her in death on April 15, 2009. During her high school years, Susan belonged to a social/charity sorority- Beta Gamma Upsilon Junior Chapter- where she held elective offices. Upon graduation from Marquette Catholic High School, she joined the Senior Chapter, serving as President in 1967. Susan was a commercial manager for the radio station WRTH from 1963 to 1983. She was then employed as an Administrative Secretary to the Director of Facilities Management at Southern Illinois University Edwardsville from 1984 until retiring in 2019. During the 70’s, she was active in the Soroptimist Club, a women’s professional organization. During the 80’s, she volunteered many hours at the Alton-Wood River Sportsman Club preparing the club room for banquets and parties. She loved fast cars, especially her red mustang, working crossword puzzles including the Sunday New York Times crossword puzzles and she enjoyed watching Jeopardy and loved cats. She is survived by a daughter and son-in-law, Sara & David Dahm of Belleville, IL a brother, Ret. Captain of Delta Airlines Roger T. Horrell of Denton, TX; a stepsister, Debra Wuellner-Clarke and many nieces, nephews, and other friends. In addition to her husband, Thomas; she is preceded in death by her parents. A prayer service will be held at 3:45 pm Friday October 8, 2021, followed by visitation from 4 – 7 pm at Elias, Kallal and Schaaf Funeral Home in Alton. A Mass of Christian Burial will be held 10 am Saturday October 9, 2021, at St. Mary’s Catholic Church in Alton with Fr. Paul Nguyen OMV. Inurnment will take place in St. Patrick’s Cemetery in Godfrey. In lieu of flowers, memorials may be made to Marquette Catholic High School in Alton or Hospice of Southern Illinois.

Dateline: Belleville Susan Margaret Stephan, age 76, of Alton, passed away Sunday, October 3, 2021, at Bria of Belleville with her family by her side. Born August 26, 1945, in Alton, she was the daughter of Harold H. and Alice (Zerwas) Horrell.... View Obituary & Service Information

The family of Susan Margaret Stephan created this Life Tributes page to make it easy to share your memories.

Send flowers to the Stephan family.