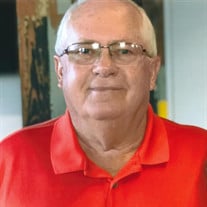 It is with great sadness that the family of Steven “Steve” D. Goodman, 70, of Godfrey, announce his passing on Tuesday, February 2, 2021 at 9:32 AM at his home, after a six month battle with cancer. He was born on May 14, 1950 the son of James and Corita (Johnson) Goodman. On April 1, 2011 he married Susan M. Huber in Macoupin County. She survives. Steve graduated from Mt. Olive High School in 1968. He proudly served in the U.S. Army and was a Vietnam War Veteran. Steve retired from Olin Corporation where he worked as a Utilities Superintendent for 40+ years. He enjoyed traveling and took great pride in watching his grandchildren compete in sports and academics. Steve was an avid golfer, enjoyed spending time outdoors hunting and fishing and relished his time motorcycle riding. He treasured his time spent with family and friends. Steve was the most generous man to anyone he ever met. He was a friend and mentor to all. His quick wit and endless stories always left you with a smile. His uncanny ability to remember the name of every restaurant during all his travels was amazing. Anybody that truly knew Steve, knows that car dealerships throughout the area will be devastated. Steve lived his life to the fullest and never wasted a single day. He was truly a man with no regrets. The love for his family and the absolute joy and extreme pride in his grandchildren was immeasurable. In addition to his wife, he is survived by his children, Missy (Rich) Ross of Buffalo Grove, IL, Steve (Tabi) Goodman of Bethalto, IL and Ryan (Sarah) Goodman of Bethalto, IL; five grandchildren, Amanda (fiancé Mike), Ben, Olivia, Julia and Mason; a brother, Roger (Carol) Goodman of Mt. Olive, IL; a sister, Harriet Grimes of Litchfield, IL. Steve is also survived by his wife’s parents, Don and Sarah Huber along with several sister-in-laws and brother-in-laws as well as numerous nieces and nephews. In addition to his parents, he was preceded in death by two brothers, Jim Goodman and John Goodman and one sister, Marilyn Goodman. Per the family’s wishes, cremation rites will be accorded. A private memorial service for immediate family will be held at Elias, Kallal and Schaaf Funeral Home in Godfrey. A celebration of life will be held at a later date. Memorials may be made to: Got Your Six Support Dogs (Provides service dogs to veterans and first-responders) 6 Schiber Court Maryville, IL 62062 www.gotyoursixsupportdogs.org

The family of Steven "Steve" D. Goodman created this Life Tributes page to make it easy to share your memories.

It is with great sadness that the family of Steven “Steve” D....

Send flowers to the Goodman family.