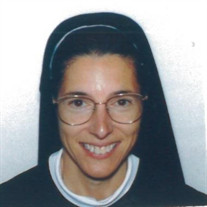 Sister Mary Grace (Donna) Cozzoli was called home by our Lord into His eternal peace on January 24, 2021. She died, strengthened through the Sacrament of the Sick and accompanied by the prayers of the Sisters, at the Infirmary at St. Francis Convent in Alton, Illinois. Sister Mary Grace was born on January 19, 1955, in Plainfield, New Jersey, She entered the Congregation of the Sisters of St. Francis of the Martyr St. George on September 8, 1989 and was received into the Novitiate on August 15, 1990. On August 15, 1992, she made her First Profession, and then consecrated herself to the Lord forever in Final Profession on August 15, 1998. After her First Profession, Sister Mary Grace worked in Pastoral Care at Anthony’s Hospital in Alton until 1994. She then worked for two years as an aide in St. Francis Day Care Center and at St. Catherine Elementary School in Tulsa, Oklahoma. She was then transferred to St. Elizabeth Convent in Somerset, New Jersey, where she served the retired priests of Maria Regin House. In August of 2002, she was transferred to St. Joseph Convent in Lincoln, Nebraska, where she again served retired priests at Bonacum House. Returning to Alton in 2004, she did secretarial work in St. Francis Day Care Center and in St. Anthony’s Health Center. She then worked for one year in the household of the Archbishop of St. Louis, before being transferred to Washington, DC, to accept the office of Sister-in-Charge and to manage the domestic services in the Apostolic Nunciature. She carried out this apostolate for six years, and then was transferred back to St. Francis Convent in Alton, where she fulfilled the office of Sacristan, before accepting appointment as the local Superior of the Convent in late 2020. Sister Mary Grace is survived by her Religious Community, and by her sisters Joan (Tom) Rooney of New Jersey and Carol (Henry) Zmuda of Florida.. She was preceded in death by her parents, Joseph and Martha Cozzoli of Plainfield, New Jersey and by a brother, Frank Cozzoli. Private visitation will take place in the Chapel of St. Francis Convent from 3:00 pm on January 26, 2021, until the 7:30 pm Wake Service. Visitation will continue from 9:00 am to the time of the Funeral Mass at 10:00 on Wednesday, January 27, 2021, at St. Mary’s Church, Alton, Illinois, followed by the burial in St. Joseph’s Cemetery. Memorials may be made to: Masses or St. Francis Adoration Chapel.

Sister Mary Grace (Donna) Cozzoli was called home by our Lord into His eternal peace on January 24, 2021. She died, strengthened through the Sacrament of the Sick and accompanied by the prayers of the Sisters, at the Infirmary at St. Francis... View Obituary & Service Information

The family of Sister Mary Grace (Donna) Cozzoli created this Life Tributes page to make it easy to share your memories.

Send flowers to the Cozzoli family.