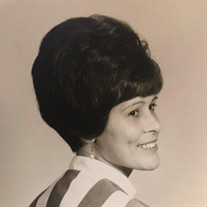 Shirley A. McCalley, 86, died peacefully on January 15, 2021 at Delmar Gardens of O’Fallon from complications of COVID-19. She spent her last afternoon with her beloved daughter and grandson; if you’d asked her, she’d have told you he was the light of her life. Shirley was born on December 6, 1934 to Milton Tarrant and Mary Keasler Tarrant in East Alton, Illinois. She married her high school sweetheart and the love of her life, Daniel McCalley, on May 15, 1953, and they went on to create a family with the addition of their daughter Mitzi McCalley Jacobsen. But her true joy in life came when she became grandma to her only grandchild, Matthew Jacobsen. Shirley graduated from Civic Memorial High School in 1952 and went on to do clerical work at Olin in Alton, Illinois. She left work to be a stay-at-home mom when Mitzi came along, spending much of her time volunteering for her church and acting as a room mother at school. In later years, she returned to work as a bookkeeper for Robert Kassin, Attorney-At-Law, where she worked with her best friend, Sandy Dunlap. After retiring, she began one of the biggest adventures of her life when she left her hometown of Bethalto at the age of 66 to move to Battlement Mesa, Colorado to help raise her grandson after he was born. Shirley will always be remembered for her love of family. She had eight siblings and spending time with her brothers and sisters and their families as well as Dan’s family was one of her greatest joys. There were many Sundays spent at her parents’ house and later, monthly dinners and annual family reunions. She was known for her sense of humor, feisty spirit, and huge heart and she made friends wherever she went. She was very strong in her faith and was a member of the Bethalto United Methodist Church. She is survived by her husband, Daniel McCalley, her daughter Mitzi Jacobsen (Paul) of O’Fallon, MO, and her grandson Matthew Jacobsen. She is also survived by her sister Dorothy “Tiny” Hawkins (Darrell) of Scottville, IL, Ronald Tarrant (Janet) of Bethalto, IL, sister-in-law Donna Tarrant, sister Jeanette McCarthy of Jacksonville, IL, and brother Richard Tarrant (Jan) of Cheyenne, WY. She was preceded in death by her parents, her brother Dean Tarrant (Erica), h brother Lloyd Gene Tarrant, brother Donald Tarrant, sister-in-law Jeani Tarrant, and sister Linda Spurgeon (Tom). In order to respect CDC Guidelines and the COVID-19 Pandemic, a private service will be held for immediate family at Elias, Kallal, and Schaaf Funeral Home in Bethalto, Illinois. A memorial service and celebration of Shirley’s life will be scheduled at a later date once it is deemed safe to gather again. Memorials can be made to Operation Food Search and the Bethalto United Methodist Church.

Shirley A. McCalley, 86, died peacefully on January 15, 2021 at Delmar Gardens of O&#8217;Fallon from complications of COVID-19. She spent her last afternoon with her beloved daughter and grandson; if you&#8217;d asked her, she&#8217;d have... View Obituary & Service Information

The family of Shirley A McCalley created this Life Tributes page to make it easy to share your memories.

Send flowers to the McCalley family.