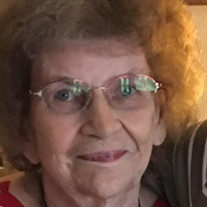 Dateline: Bethalto Shelby R. Forrester, 85, passed away on Wednesday, October 27, 2021, at 6:07 pm, at River Crossing of Alton. She was born October 1, 1936, in Ullin, IL, a daughter of the late John A. and Flora (Lawson) Slusher. Shelby married Carl “Corkey” Kesler in 1952 and moved to the East Alton area. They later divorced. She then married Wilburn “Willy” Forrester on January 12, 1985. He died August 4, 2001. She worked at Olin Corp. for 34 years in different departments, retiring as a Rockwell tester on November 1, 1998. Shelby enjoyed crocheting, having lunch with her Olin retiree friends and spending time with her family. She used to travel with her sisters from coast to coast. Surviving are a daughter, Rhonda Keeney of Brighton; a son, Clyde “Randy” Kesler of East Alton; eight grandchildren, Mikki Dearing, Brandi Jackson, Michael Taylor Bonbrake, Martin Keeney, Daniel Spickerman, Erik Kesler, Shelby Spickerman, and James “Jay” Stanton; six great-grandchildren, Curt and Kelsey Kutter, Taylor Leonard, Cowan Jackson, Abbigail Kesler and Aryn Rose; a step-son, William Forrester of Roxana; a step-daughter and her husband, Patricia and Jeff Cobine of Wood River; two step-grandsons, Justin and Austin Cobine; a sister, Oleta Brown of Ullin; several nieces and nephews; and Carl and Linda Kesler of East Alton and John Stanton of East Alton. Along with her parents and husband, she was preceded in death by a daughter, Patricia “Trisha” Spickerman of East Alton; a brother, Richard Slusher of Ullin; and a sister, Eleanor Ledbetter of Memphis, TN. Visitation will be held on Monday, November 1, 2021, from 4 pm to 8 pm, at Elias, Kallal and Schaaf Funeral Home in Bethalto, where funeral services will be held on Tuesday, November 2, 2021, at 10 am with Pator Terry McKinzie officiating. Burial will follow at Rose Lawn Memory Gardens in Bethalto. Memorials can be made to The American Cancer Society and/or a charity of one’s choice. Online condolences and guest book may be found at www.eliaskallalandschaaf.com

Dateline: Bethalto Shelby R. Forrester, 85, passed away on Wednesday, October 27, 2021, at 6:07 pm, at River Crossing of Alton. She was born October 1, 1936, in Ullin, IL, a daughter of the late John A. and Flora (Lawson) Slusher. Shelby married... View Obituary & Service Information

The family of Shelby R. Forrester created this Life Tributes page to make it easy to share your memories.

Send flowers to the Forrester family.