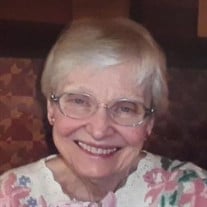 Dateline: Alton, Illinois Shannon Sue Adler, 84, passed away Wednesday, March 30, 2022 at San Gabriel Memory Care in Godfrey with her family by her side. She was born on May 11, 1937 in Hardin County, IL the daughter of Silas and Marie (Brinkley) Ledbetter. She married Marvin Gene Adler on September 6, 1958 at Brown Street Baptist Church in Alton, IL and he survives. Shannon had worked at Owens-Illinois Credit Union, followed by several years at Family Service Visiting Nurses. Shannon later worked in Medical Transcription at St. Anthony Health Care. In addition to her husband, Marvin; Shannon is survived by two children and their spouses, Shawn Michael and Diane (Fox) Adler of Alton, and Maurie (Adler) and Robert Charles Feise of East Lansing, MI; two grandchildren, Joshua Andrew Kim, and Korina Marie Kim, both of East Lansing, MI; a brother, Nelson Leon and Linda C. Ledbetter of Vonore, TN; four nephews, Rodney and Masako Ledbetter, of Nashville, TN, Terry and Tammy Adler of Owasso, OK, Randy and Darlena Adler of St. Charles, MO, and Rick and Vicky Adler of Mitchell, IL; and many other relatives and friends. She was preceded in death by her parents; her father and mother-in-law, Marion and Louise Adler; and a brother-in-law, George Adler. Visitation will be held Sunday, April 3, 2022 from 2:00 pm until 6:00 pm at Elias, Kallal & Schaaf Funeral Home in Alton, Illinois. Funeral services will be held Monday, April 4, 2022 at 10:00 am in the funeral home chapel with Pastor Nate Bock officiating. Burial will take place in Rose Lawn Memory Gardens. Memorials are suggested to the San Gabriel Memory Care Activities Fund in Godfrey. Online condolences and guestbook may be found at www.eliaskallalandschaaf.com.

Dateline: Alton, Illinois Shannon Sue Adler, 84, passed away Wednesday, March 30, 2022 at San Gabriel Memory Care in Godfrey with her family by her side. She was born on May 11, 1937 in Hardin County, IL the daughter of Silas and Marie... View Obituary & Service Information

The family of Shannon Sue Adler created this Life Tributes page to make it easy to share your memories.

Send flowers to the Adler family.