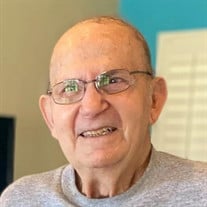 Samuel Joseph Bellitto, 92, went to meet his heavenly Father at 3:32 pm on Saturday, April 9, 2022, at his home. He was born on December 12, 1929, in Alton, IL, the son of Anthony and Mary (Marino) Bellitto. Samuel was a member of St. Mary's Catholic Church in Alton and retired as Lead Baker at Noll's Bakery, which was later purchased by Colonial Bakery. He enjoyed baking so much that he volunteered his time at local bakeries. He enjoyed spending time with his family and showered them with homemade bread and pastries at every family gathering. He is survived by a two sisters, Clara Segraves of California and Frances Pellegrino of Glen Carbon, IL; a sister-in-law, Earmel Bellitto of Godfrey; a niece, Karen Bellitto of Godfrey, a nephew, David (Marisa) Bellitto of Godfrey, a great niece, Lia Bellitto, and a niece, Cathie (Frank) Lamere of Alton, along with many other nieces and nephews. In addition to his parents, he was preceded in death by six brothers, Anthony, Frank, Vito, John, Joseph, and Angelo Bellitto, and a sister, Mary Teal. Visitation will be from 12 pm until time of Funeral at 1 pm, Wednesday, April 13, 2022, at Elias, Kallal and Schaaf Funeral Home in Godfrey. Burial will follow at St. Joseph Cemetery in Alton with military rites by Alton VFW Post 1308. Memorials are suggested to Masses at St. Mary's.

The family of Samuel Joseph Bellitto created this Life Tributes page to make it easy to share your memories.

Send flowers to the Bellitto family.