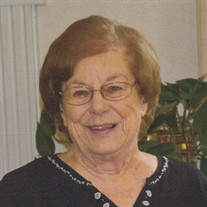 SaMary “Polly” Louise Lekkas, 86, of Godfrey departed this life peacefully on Wednesday, November 17, 2021, at her home at Asbury Village in Godfrey. She was born on January 8, 1935, in her family home in Nashville, IL, the daughter of Harry Homburg and Jean (Walker) Homburg. She was united in marriage to Peter Konstantinos Lekkas, originally from Thessaloniki, Greece, May 29, 1959, in St. Louis. He preceded her in death in 2015. Surviving are two daughters and sons-in-law, Dr. Fanee and Wayne Freeman of Bozeman, Montana, and Mary and Derrick Stiebler of St. Louis, Missouri; one son, Dr. Konstantinos Lekkas of Des Moines, Iowa; five grandchildren, Trent and Nicholas Stiebler, Elleana, Alexandra and Peter Lekkas; three step grandchildren, Sarah Stiebler Cotur, Dr. Emily Freeman and Abby Freeman; a sister, Sara Chase and brother-in-law, Gerald of Ames, Iowa; a sister-in-law, Athena Davelopoulou of Thessaloniki, Greece; and several nieces, nephews and many friends. Polly graduated high school in Nashville, IL in 1952 and the Evangelical Deaconess Hospital nursing school in St. Louis in 1955. She worked as a nurse in St.Louis and met her future husband there. They settled in Godfrey and raised their three children. She was a longtime member of Godfrey Congregational Church, formerly Community Congregational United Church of Christ where she sang in the choir for many years. Cremation rites will be accorded. Visitation will be from 10 am until time of Memorial Service at 11 am Saturday November 27, 2021, at the Godfrey Congregational Church in Godfrey with Pastor Richard McCreary. Memorials may be made to Godfrey Congregational Church.

The family of SaMary "Polly" Louise Lekkas created this Life Tributes page to make it easy to share your memories.

Send flowers to the Lekkas family.