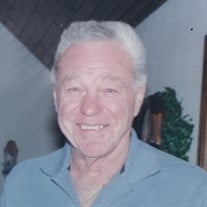 Dateline: Bethalto Russell “Russ” Franklin Jones, 83, of Bethalto, passed away on Saturday, December 19, 2020 at his residence, surrounded by his family, under the care of BJC Hospice. He was born in Clinton, Kentucky, on July 30, 1937, the son of Wiley F. and Erma M. (Russell) Jones. He married Loretta M. Woolsey on April 4, 1958 at the 1st Baptist Church in Wood River. Russ was a carpenter for 16 years out of Wood River Local and then went to work for Local #520 as an operating engineer for over 30 years. He was also a boat pilot for Local #520. Russ is a United States Army Reserves Veteran and served for 12 years. He was a member of the 1st Christian Church of Bethalto for over 50 years. He enjoyed watching western movies on TV, traveling, cleaning his truck, and spending time with his family and friends, especially being around his grandchildren, great-grandchildren. Along with his wife, Loretta, he is survived by his children, Rick (Susan) Jones of Bethalto, Robyn Swift of Bethalto, and Roger (Maria) Jones of Collinsville; sisters, Reba Trout of Riverside, CA, and Joyce (Roger) Riffelmacher of Ft. Meyers, FL; six grandchildren, Adam (fiancé Kait Kopp) Jones, Amanda Swift, Kaylin (Evan) Jones, Tanner (Alexa) Jones, Cody (Alyssa) Jones, and Kaci (Josh) Hopkins; eight great-grandchildren, Landon, Blair, Lola, Addison, Lorelei, Kennedi, Elliana, Liam, and one more on the way. Russ was preceded in death by his parents. Visitation and services will be private at Elias, Kallal and Schaaf Funeral Home in Bethalto. Rev. Tony Jackson will officiate. Burial will follow at Rose Lawn Memory Gardens in Bethalto. Memorials can be made to St. Jude Children’s Hospital and/or Shriners Children’s Hospital. Online condolences and guest book may be found at www.eliaskallalandschaaf.com

Dateline: Bethalto Russell &#8220;Russ&#8221; Franklin Jones, 83, of Bethalto, passed away on Saturday, December 19, 2020 at his residence, surrounded by his family, under the care of BJC Hospice. He was born in Clinton, Kentucky, on July... View Obituary & Service Information

The family of Russell "Russ" Franklin Jones created this Life Tributes page to make it easy to share your memories.

Send flowers to the Jones family.