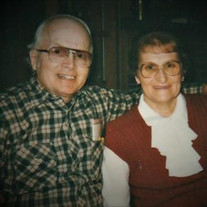 Rollin “Gene” Eugene Sands Marcella Marie Sands ALTON – Rollin “Gene” Eugene Sands, 96, of Alton, Illinois born August 3, 1925 in Salem, Illinois to Rollin and Ruby Sands, passed away peacefully Friday October 22, 2021 at 3:33 A.M. in Alton Memorial Rehabilitation & Therapy Center, Alton, Illinois with his family by his side under the care of BJC Hospice. He was a veteran of the United States Navy, serving during World War II as a Radio Man October 1943 to March 1946, having received the Victory Metal, Asiatic Pacific Area Campaign Medal and Philippine Liberation Ribbon. One of the crowning moments in his later years was participating in an Honor Flight to Washington, D.C. with his son Stephen. On March 15, 1951 he married Marcella Marie Vaughn in Denver, Colorado with Reverend J.B. Miller officiating. Marcella’s sister Nelma and brother Marshall witnessed the big event. Gene was a Biology teacher with the Alton School District Unit #11 from 1960 to 1980, retiring to a peaceful life in the country. He operated Sands Nursery from 1979 to 1998. Surviving are his children Marsha Harmon (Danny) of Taylorville, Illinois, Kim McCormick (Bernell) of Chandler, Arizona and Stephen Sands (Joan Albers) of Alton, Illinois; sister-in-law Lorna Sands of Murphysboro, IL; numerous nieces and nephews; two grandchildren. Gene was predeceased by three brothers: Dr. Wayne Sands, Earl Sands & Glen Sands; his wife Marcella. He will be greatly missed by his inside cat Darwin and outside feral cat Mariah. Gene’s death was precipitated by a fall he suffered several weeks ago in the yard at his home, doing what he loved to do best – potting up prairie plants for the winter. He was an avid (rabid) nature photographer, Illinois native prairie plant expert, botanist, mentor, expert bird watcher and a friend to all. He was one of the original founders of the Piasa Palisades Group of the Sierra Club. Additionally, he was a member of Audubon Society, The Nature Institute, TreeHouse Wildlife Center & Watershed Nature Center. He frequented the Heartland Prairie at Gordon Moore Park, Riverlands and Two Rivers National Wildlife Refuge. Additionally, he always looked forward to his twice weekly trip to McDonald’s for coffee and visiting his friends. Gene was a phenomenon with an amazing social circle of friends & supporters. Per his request, cremation rites were accorded. The family sincerely & gratefully acknowledges (in no particular order) Vernon & Cheryl LeClaire, Andrea Crabtree, Tom Shirrell, Gene Shirrell, Diana Loftis, Carol Jenkins, Doug Lillesve, Brad Levite, Paul Braundmeier, Chris Dyson, Larry & Carol Roseberry, Sandy Budde, Tom Doyle, Dr. Richard Keating, Wayne & Jen Politsch and Ken Depper for all of their love, friendship and support. Any omissions on this list are regrettable. You are all amazing & caring people whom dad loved very much. Marcella Marie Sands, 91, of Alton, Illinois, born October 8, 1928 in Mount Vernon, Illinois to Lila and Clarence Vaughn, passed away Friday, October 2, 2020 at Robings Manor in Brighton, Illinois with her family by her side under the care of BJC Hospice. Marcella was a secretary with the Alton School District from 1977 to 1991, retiring to a peaceful life out on their 10 acre wildlife preserve in Fosterburg, Illinois. She enjoyed crocheting, cross stitching, crossword puzzles and watching the birds & critters from the back deck. Mom was a saint, quiet and unassuming, but the one who was really in charge. Surviving are her children; one brother, Duane Vaughn (Carol) of Payette, Idaho; numerous nieces and nephews; two grandchildren. A sister, Nelma Smith and a brother, Marshall Vaughn predeceased her. On November 15, 2021, from 4 P.M. to 8 P.M, there will be a visitation for Gene & Marcella at Elias-Kallal & Schaaf Funeral Home, 2521 Edwards Street, Alton, Illinois. On November 16, 2021, a funeral procession with military Color Guard will depart the funeral home at 11:30 A.M and proceed to Jefferson Barracks National Cemetery for military services and interment of Gene and Marcella which will begin at 1:00 P.M. In the spring of 2022, per Gene’s request, there will be a celebration of their lives at the Heartland Prairie in Gordon Moore Park. A separate announcement of that event will be made. Condolences may be expressed online at www.eliaskallalandschaaf.com. Correspondence may be sent to Stephen Sands, 911 Langdon St, Alton, IL 62002-3653. In lieu of flowers, memorials are suggested to TreeHouse Wildlife Center, 23956 Green Acres Rd, Dow, IL 62022, Watershed Nature Center, 1591 Tower Ave, Edwardsville, IL 62025 or plant a native Illinois prairie plot in your yard and take lots of pictures of the wildlife that visits it!

The family of Rollin "Gene" Eugene Sands created this Life Tributes page to make it easy to share your memories.

Send flowers to the Sands family.