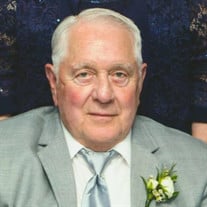 Dateline: Hardin Roger O. Hurley passed away November 28, 2020 at 6:30 p.m. at Mercy Hospital with his family by his side. Roger was the son of Joseph and Susie (Cummings) Hurley, he was born on August 17, 1940. He attended St. Norbert’s Grade School and graduated in 1958 from Hardin High School. He enlisted in the military and served three years as a Seaman with the USS Navy. When he returned home, he worked for Owens Illinois Glass Co. until he was employed by Dixon Distributing Co. where he retired. Roger was the owner of HPL, which he purchased in 1981 and has run for 40 years. He was a 4th degree member of the Knights of Columbus 4417, Volunteer Fireman, and a proud Ducks Unlimited Sponsor in Calhoun. Roger was an avid duck hunter for over 60 years. He hunted every day for as long as the season lasted. He sometimes drove as much as 80 miles a day during duck season. He also was an avid golfer and loved to travel to different courses across the United States. He worked hard, played hard, and lived life to the fullest. In 1965 he married Roberta Miller at St. Norbert’s Church in Hardin. In addition to his wife, Roberta Hurley, he is survived by his son, David (Amy) Hurley; four grandchildren, Alexandra (Andrew) Sievers, Zachary Hurley, Gabriella Hurley, and Jackson David Hurley; two brothers, John (Jean) Hurley and William (Francis) Hurley; a Sister-in-law, Cathy (Mark) Rice; and numerous nieces and nephews. He was preceded in death by his parents, his brother, Chuck Hurley, and his brother and sister-in-law, Corbett (Doris) Miller. There will be a private visitation for family. Graveside service will be Wednesday December 2, 2020 at 10:00 a.m. at St. Norbert’s Cemetery in Hardin. Burial will follow at St. Norbert’s Cemetery. Memorials may be made to St. Norbert’s School or Hardin K.C. Hall.

The family of Roger O. Hurley created this Life Tributes page to make it easy to share your memories.

Send flowers to the Hurley family.