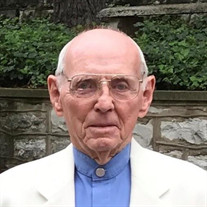 Rodley “Rod” Carroll Derricott II, 90, passed away at 12:05 pm, June 28, 2021, in Alton, with his daughters by his side. Rod was born in Springfield, Illinois on Jan. 1, 1931, son of the late Rodley C. Derricott I and Myrtle Louise (Russell) Derricott. He graduated from Alton Senior High School and enlisted in the Navy where he was an electrician. Rod enjoyed his time in Navy, serving during the Korean War. Besides being an electrician, he also showed movies on the ship and befriended the cooks. Rod married the love of his life, the late Patricia Joan (Hanei) Derricott on March 28, 1952, at St. Paul's Episcopal Church in Alton. He was employed by AT&T (Illinois Bell Telephone Company) for 25 years. Rod also worked with Moyer General Contractors and Eagle Enterprises Lighting where he had the pleasure of working with close friends. Rod was a member of St. Paul's Episcopal Church in Alton. His greatest joy was serving the church and spending time with his family and grandchildren. Rod was a true dog lover and enjoyed not only the dogs’ companionship, but the friends he greeted on multiple daily walks. Rod is survived by two daughters, Jill and her spouse Fin Teasley of Reisdville, N.C, and Carol Okamoto of Arlington Heights, Ill.; six grandchildren, Beth Sinks, Ben Teasley, Stephanie Copley, Michael Kokos II, Kevin Okamoto and Katie Okamoto, twelve great-grandchildren, John Thomas Sinks, Hannah Sinks, Nora Teasley, Eli Teasley, Kolt Teasley, Kailei Copley, Maddie Copley, Stelluna O’Neill, Liyah Michelle Kokos, Liam Kokos, Michael Kokos III and Bodie Okamoto. In addition to his parents, he was preceded in death by a sister, Patsy Williams and a daughter Susan Kokos. In celebration of his life, visitation will be from 10 until time of service at 11 a.m., Saturday September 4, 2021, at Resurrection Lutheran Church at 1211 Homer Adams Parkway Godfrey, IL in Godrey with Fr. David Boase officiating. Per his wishes, cremation rites will be accorded and Inurnment will be at St. Paul's Episcopal Church. In lieu of flowers, memorials may be directed to the St. Paul's Episcopal Church or OSF Hospice.

The family of Rodley "Rod" Derricott created this Life Tributes page to make it easy to share your memories.

Send flowers to the Derricott family.