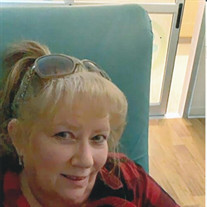 Robin Lynn Lehr, age 58, of Bethalto, passed away Tuesday, December 21, 2021 at Alton Memorial Hospital. She was born October 21, 1963, in St. Louis, the daughter of Larry and Helen (Masiero) Null. She married Timothy Lehr on July 24, 1982, in Alton. Robin was a 3rd grade teacher at North Elementary School in Alton. She was a loving wife, mother, and grandmother. She enjoyed gardening, watching her children play sports, and being outside, especially when chasing around her grandson. Along with her husband, she is survived by her mother Helen Null; three sons and their spouses, Mathew and Winston Lehr of Granite City, Jacob and Lauren Lehr of Edwardsville, and Christian Lehr; three sisters and their spouses, Tina and Lester Withers of Cottage Hills, Kristal Null of Cottage Hills, and Lisa Henkhaus of Cottage Hills; and one grandson Jameson Lehr. Robin is preceded in death by her father Larry Null. Per her wishes, cremation rites were accorded. Visitation will be held Thursday December 30, 2021 from 5:00 to 7:00 pm with a memorial service at 7:00 pm at Elias, Kallal and Schaaf Funeral Home in Bethalto. In lieu of flowers, memorials may be made to Elias, Kallal, and Schaaf to help cover the cost of funeral expenses. Online condolences and guest book may be found at www.eliaskallalandschaaf.com

The family of Robin Lynn Lehr created this Life Tributes page to make it easy to share your memories.