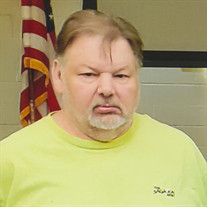 Dateline: Alton, IL Robert D. Northway, 60, of Alton, IL passed away on Monday, May 17, 2021 at 9:33 am at St. Anthony’s hospital in Alton. He was born on December 20, 1960 in Alton, IL a son of James and Bonnie (Stamm) Northway. On April 17, 1979 Robert married Sandra Weber at the Salvation Army Church in Alton. Robert served his country in the United States Army as a welder on mike boats until he was honorably discharged. He worked at OSF St. Anthony’s Healthcare until he went to work at Lowes in Alton and Granite City for 19 years. He was a member of the Salvation Army Church in Alton. He was a jack of all trades, loved going to Branson, and going out to breakfast. He was very passionate about animals and pets, owning and caring for several. He is survived by his wife, Sandra of Alton, Il; two sons, Frank Northway (Jennifer) of Alton, Il and Brad Northway of Bethalto, IL; four granddaughters, Haley, Megan, Sabrina, and Abby Northway; two brothers, Mike Northway (Jeanne) and Larry Northway; and a sister, Judy Wallace (Ronnie); several nephews and nieces; and several loved family pets. In addition to his parents he was preceded in death by a step-son, Michael Weber; two brothers, Donald and Bruce Northway; and several sisters-in-law and brothers-in-law along with several nephews and nieces. Visitation will be held on Thursday, May 20, 2021 from 4:00 pm until 8:00 pm at the Salvation Army Church in Alton, IL Funeral Services will be held on Friday, May 21, 2021 at 1:00 pm at the Church with Lt. Lily Reinier and Lt. Stephen Reinier officiating. Burial will take place at Upper Alton Cemetery. Memorials may be made to the Salvation Army Church in Alton

The family of Robert D. Northway created this Life Tributes page to make it easy to share your memories.

Send flowers to the Northway family.