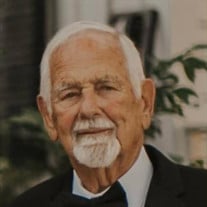 Robert Henry Meyer, 89, of Camdenton, MO passed away peacefully on March 8, 2022, in his winter paradise of Puerto Vallarta, Mexico, with his family by his side. On May 17, 1932, Bob was the 5th and youngest child born to Dr. Oliver Albert and Mildred Fern (Feldwisch) Meyer. His mother died when Bob was nine months old. His father later married Henrietta (Hattie) Wanamaker. Hattie immediately loved Bob as her very own. In 1950, at age 18, after seeing the movie The Sands of Iwo Jima with John Wayne, Bob walked out of the movie theater, straight to a recruiting table and signed up on the spot becoming a proud U.S. Marine. He attained the rank of Sergeant and served in the Korean War. Bob married Sharlene (Coontz) Meyer in Wood River, IL on Dec 15th, 1956. She survives. Bob and Sharlene enjoyed a full life of adventure, fun and travel visiting every state and many foreign countries. A special highlight in Bob's life was being a participant on an Honor Flight to Washington DC in 2015. He was preceded in death by his parents, stepmother and four siblings- Oliver Feldwisch Meyer, Gail Meyer, Felicie Ione Wiedman and Miriam Pollock. Bob's love of life, adventure & travel will be continued through his two children, Robert Oliver Meyer (Stephanie) and Gayle Meyer Taylor (Bryant); four grandchildren, Major Tyler Stephen Bahn USMC (Rae), Christina Sharlene Bahn, Bryan Oliver Meyer, and Melissa Schrader, along with many nieces, nephews, and valued friends. Elias, Kallal and Schaaf Funeral Home in Godfrey, IL is entrusted with professional services. A graveside service, with full military honors, will be held 11 AM on Saturday, April 9th, 2022, at Valhalla Memorial Park in Godfrey, IL. Memorials in Bob's name may be made to Dogwood Animal Shelter in Camdenton, MO or a charity of one's choice.

Robert Henry Meyer, 89, of Camdenton, MO passed away peacefully on March 8, 2022, in his winter paradise of Puerto Vallarta, Mexico, with his family by his side. On May 17, 1932, Bob was the 5th and youngest child born to Dr. Oliver Albert... View Obituary & Service Information

The family of Robert Henry Meyer created this Life Tributes page to make it easy to share your memories.

Send flowers to the Meyer family.