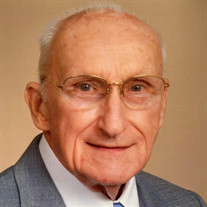 Robert E. Lyons, 92, died at 7:35PM on Friday, May 20, 2022, at his home in Godfrey, IL. Born in Alton, IL May 16, 1930, son of Earl and Margaret (Lucker) Lyons. He graduated from S.S. Peter and Paul Grade School in 1944 and Marquette Catholic High School in 1948. He served in the U.S. Air Force from 1951 to 1955, stationed 2 ½ years in Japan and Korea working as an Electronics maintenance man. He married Stella Ursch on April 7, 1956; she preceded him in death on August 30, 1999. He retired from Illinois Bell Telephone Co. in 1992, working as a Communications maintenance man for 37 years. He was an active athlete in both softball and baseball and coached in Alton Little League, summer teenage baseball, and American Legion for over twenty years. He was a member of the Alton Optimist Club. He was also a member of St. Mary’s Church and served as an usher for over twenty years. He was an avid St. Louis Cardinals baseball fan; other interests included golf, wood carving, woodworking, gardening, and traveling. He is survived by three sons – Robert (Ann) Lyons of Rochester, MN, William (Martha) Lyons of Heyworth, IL, and Richard (Cindy) Lyons of Godfrey. Also surviving are seven grandchildren — Daniel (Danielle), Thomas (Jenna), Andrew (Sara), Timothy, and Emily Lyons and Bradley (Melissa) and Katie Hazelwonder (Tara Noyes) along with seven great-grandchildren — Jack, Claire, Madelynn, Olivia, and Mitchell Lyons and Ryan and Olivia Hazelwonder. He was also preceded in death by a sister, Marjorie Walter. Visitation will be from 4-7 pm Wednesday, May 25, 2022, at Elias Kallal and Schaaf Funeral Home in Godfrey, IL. A Mass of Christian Burial will be celebrated at 10 am Thursday, May 26, 2022, at St. Mary’s Catholic Church in Alton. Burial will follow at St. Joseph Cemetery in Alton, IL. In lieu of flowers, memorials may be made to a charity of one’s choice.

The family of Robert E. Lyons created this Life Tributes page to make it easy to share your memories.

Send flowers to the Lyons family.