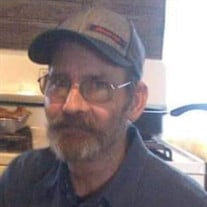 Dateline: Moro, IL Robert E. Hausman, 61, of Moro, IL passed away on Monday, March 21, 2022, at 11:22 am at his home surrounded by his family. He was born on January 2, 1961, in Alton, IL the son of Nelson E. and Joyce A. (McDonald) Hausman. On December 5, 1997, at the Madison County Court house Robert married Barbara Wallis. Robert served his country in the United States Army. He worked for Roberts Ford in Alton, IL and was part of the union. He enjoyed drinking his coffee, working in the yard, working on cars, drawing, and most of all, spending time with his granddaughter, Katie. He is survived by his wife, Barb Hausman of Moro, IL; step-daughters, Tonya Schaaf of Moro,, IL, Jennifer Brown of Moro, IL, and Susan Brown of Wood River, IL; grandchildren, Kathy Schaaf, Katie Schaaf, Ali Brown, and Westen Bittner; siblings, Roy Hausman (Susan) of Godfrey, IL, Vickie (nee: Hausman) Stewart of Wood River, IL, and Jerry Hausman of Alton, IL; mother-in-law, Judy Wallis of Plainview, IL; and brother-in-law, Franklin Wallis Jr. of Plainview, IL. Along with his parents, Robert was preceded in death by his brother, James Hausman; and a father-in-law, Franklin Wallis Sr. A Memorial Celebration of Life Visitation on Friday, March 25, 2022, from 4:00 pm until 6:00 pm at the Elias Kallal and Schaaf Funeral Home in Bethalto, IL. Memorials can be made to K9s for Warriors.

The family of Robert E. Hausman created this Life Tributes page to make it easy to share your memories.

Send flowers to the Hausman family.