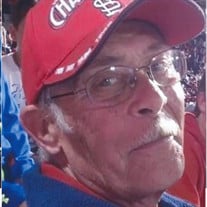 Robert “Eddie” “Bob” Zumbaum, 72, of East Alton, Il passed away on Saturday, November 6, 2021 at 12:30 am at Alton Memorial Hospital, with his family by his side. He was born on July 28, 1949, in Eldorado, IL the son of Robert “Bob” and Catherine M.(Devous) Zumbaum. On July 25, 2015, he married Debra J(Poleet) in East Alton, IL. In his early life, Bob held a position at Laclede Steel in the maintenance dept, moving to PremCor as a pipefitter and then later on working for Coleman Campers in the sales dept. He was of the Catholic Faith. He enjoyed watching the St. Louis Cardinal Baseball games, talking on his CB, fishing at Table Rock Lake, hunting, mowing grass, being outside, and most of all spending time with family and friends. Bob is survived by his wife, Debra of East Alton, IL; children, Kim Mosby (Herb) of E. Alton, IL, Heather Bodine (Roger) of Shipman, IL, Jesse Johnson (Christina) of Florida, and Lisa Flener of Rosewood Heights, IL; siblings, David Zumbaum (Cathy) of Bethalto, IL, Michelle Ruppert (Dean) of Bethalto, IL, Karen Turner (Cecil) of Kentucky, and Kevin Zumbaum (Tina) of Godfrey, IL; seventeen grandchildren, Zakary, Samuel, Madelyn, Michael, Cody, Shane, Caity, Jeremy, Ryan, Ethan, Robbie, Chaise, Emma, Isabelle, Aidan, Isaac, and Adalyn; and two great grandchildren, Lily and Damien; along with several nieces, nephews, cousins and friends. He is preceded in death by his parents, and a daughter, Tracy Lynn Head. A visitation will be held on Monday, November 8, 2021, from 4:00 pm until 7:00 pm at the Elias Kallal and Schaaf Funeral Home in Bethalto, IL. A Mass of Christian Burial will take place at 10:00 am on Tuesday, November 9, 2021, at Our Lady Queen of Peace Catholic church in Bethalto with Father Tom Liebler officiating. Burial will take place at a later date at Jefferson Barracks National Cemetery. Memorials can be made to the American Foundation for Suicide Prevention, the Disabled American Veterans Foundation or the Alzheimer’s Association.

The family of Robert "Eddie" Bob" Zumbaum created this Life Tributes page to make it easy to share your memories.

Send flowers to the Zumbaum family.