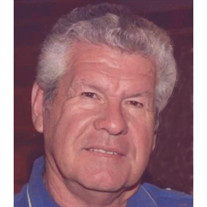 Dateline: Berryville, Arkansas Robert "Bobby" Alan Rue, 71, passed away on Monday, December 27, 2021, at University Hospital in Little Rock, Arkansas He was born on May 12, 1950, in Alton, IL to Robert and Geraldine (Wineland) Rue. Bobby grew up in Godfrey and in 1964 the family moved to Delhi and the "Rue" family farm where he helped his dad until the mid-90's. He graduated from Jersey Community High School in 1968 and then served in the United States Air Force from 1969 to 1972 as a weapons mechanic and weapons maintenance supervisor and was deployed to Thailand, Vietnam and Korea. Bobby married Dorothy Robertson and a son Brian was born from the Union. He married Pamela Sue Anderson on September 3, 1999, in Delhi, Illinois. They had recently moved to Berryville, Arkansas. Bobby was employed at the Grafton Boat Works from 1972 to 1986. He worked as an Adjuster for Olin Corporation from 1987 until his retirement in 2015. In addition to his wife, Pam; he is survived by four sisters, Terrill Woolsey of Laguna Beach, CA, Mary Rue of Jerseyville, IL, Janis (Pastor Randy) Butler of Alton, Lissa Swan of Dow, IL; a step-son , Nicholas (April) Newell of Carrollton, IL; a grandson, Nicholas S. Newell; a granddaughter, Lacey M. Newell; and numerous nieces, nephews and friends He was preceded in death by son, Brian L. Rue; his parents, Robert J. & Geraldine Rue, a brother, Jerry Chapman, a sister, Helen Crull, his paternal grandparents, Charles A. & Gertrude (Bushel) Rue; his maternal grandparents, Leslie & Winona (Bess) Wineland; and a brother-in-law, Bob Swan In celebration of his life, visitation will be Friday, January 7, 2022, 10:00 am until time of funeral services at 1:00 pm at Elias, Kallal & Schaaf Funeral Homes, Godfrey, Illinois with Pastor Randy Butler officiating. Funeral services will be held on Friday, January 7, 2022, 1:00 pm at the Elias, Kallal & Schaaf Funeral Home, 1313 West Delmar, Godfrey, Illinois, with Pastor Randy Butler, officiating. Cremation rites will follow. Inurnment will be held at 1 pm Monday January 10, 2022, at Oak Grove Cemetery in Jerseyville, IL with military rites by Jerseyville American Legion Post 492. In lieu of flowers, memorials are suggested to Elias, Kallal and Schaaf Funeral Home for funeral expenses.

The family of Robert "Bobby" Alan Rue created this Life Tributes page to make it easy to share your memories.

Send flowers to the Rue family.