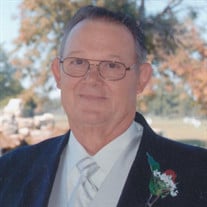 Dateline: Cottage Hills, IL Richard L. Terry, 74 of Cottage Hills passed away on Wednesday, December 29, 2021, at 8:29 pm at Alton Memorial Hospital. He was born on February 28, 1947, in Wood River, IL a son of Dean and L. June (Chamness) Terry. On March 21, 1975, in Carpenter, IL Richard married Joan T. Sackman. Richard enlisted in the Navy in 1967 and served 4 years aboard the USS Newport News and spent 2 tours in Viet Nam. He worked for Olin for 36 yrs. as a Pipefitter 1st Class and retired in 2009 and valued that very highly. He was a member of the American Legion in East Alton, IL. He enjoyed watching Western movies with his wife and spending time with his family especially his grandsons. His real passion was painting and drawing cartoon characters, even painting small pictures for the patients of Dr. Eric Daniels. He is survived by his loving wife of 46 years, Joan of Cottage Hills, IL; their children, Mark Terry (Rebecca) of Alton, IL and Melissa Shetley (Nathan) of Bethalto, IL; grandsons, Ryan Terry of Alton, IL, and James and Lucas Shetley of Bethalto, IL; four brothers, Roger Terry of Texas, Kenneth Terry (Nancy) of Tennessee, Johnny Terry of Illinois, and Darryl Terry (Lisa) of Edwardsville, IL; a sister, Diana Truman of Iowa; and several nieces and nephews. In addition to his parents, he was preceded in death by a brother-in-law, Marvin Truman; and two sisters-in-law, Monika and Janice Terry. Visitation will be held 3:00 pm to 5:00 pm on Thursday, January 13, 2022 at Elias, Kallal and Schaaf Funeral Home in Bethalto. Per his wishes, cremation rites will be accorded and inurnment will be at St. Patrick Cemetery in Godfrey, IL. Memorials are suggested to the American Diabetes Association. Online condolences can be given at www.eliaskallalandschaaf.com.

The family of Richard L. Terry created this Life Tributes page to make it easy to share your memories.

Send flowers to the Terry family.