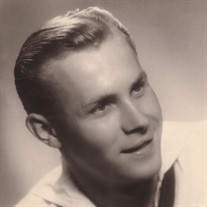 Richard W. Johnson, born September 7,1924 to two Minneapolis Swedes, Oscar and Emmie Johnson, passed away January 27, 2020. Richard spent his early years speedskating, playing baseball and golfing. As a new graduate of Edison High School, he enlisted in the Navy during World War II. He served mostly in Panama, where he repaired ships passing through the canal. While stationed in Philadelphia, he accompanied friend and shipmate Jim Parry to his home in nearby Schnecksville, PA. It was there that he met Jim’s cousin, Lizzie Krause, in 1944. He was 19 and she was 17. After two years of long-distance courting, mostly through letters, they were engaged. Their wedding was on June 7, 1947 in the Union Lutheran Church in Neffs, PA. With apartments so scarce, the newlyweds lived with his parents in Minneapolis for the first 8 to 9 months and later shared an apartment with an older woman. Other homes included Duluth, Greenwich Village, Minneapolis again, Omaha and Godfrey. Son Gary arrived in 1950 and daughter Susan in 1954. Richard spent is career mainly as a grain merchandiser with The Peavey Company (ConAgra). He spent his years working to support his family, caring for his wife and home, serving his church, skating, golfing, woodworking and building furniture. He was always supportive, responsible, generous, social and loving to his family and all of those he met. He was our husband, father, grandfather, great-grandfather, friend, tremendous role model and hero. He will be dearly loved and missed forever. In addition to his wife, whom he celebrated 74 years of marriage to in 2020, he is survived by two children, Gary (Patti) Johnson of Littleton, CO and Susan (Terry) Reeves of Nashville, TN; four grandchildren, Rebecca Leavitt, Stacy Schaffer, Jason Reeves and Jesse Gilmore; 7 great-grandchildren and several nieces and nephews. Richard is preceded in death by his parents and a sister, Doris Fall. Per the family’s request, cremation rites were accorded. A private memorial service for immediate family will take place at Asbury Village in Godfrey. Elias, Kallal and Schaaf Funeral Homes in Godfrey is entrusted with professional services.

The family of Richard Willis Johnson created this Life Tributes page to make it easy to share your memories.

Send flowers to the Johnson family.