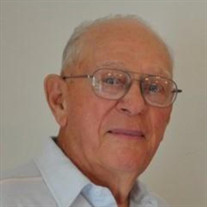 Date Line: Bethalto Raymond L. Hunt Jr., 91, of Bethalto passed away om Monday, May 17, 2021 at 10:55 pm at Alton Memorial Rehabilitation. He was born on May 4, 1930 in Blue Island, IL a son of Raymond Hunt Sr and Lucille (Blair) Kornder. On July 30, 1949 he married Gloria Clark in Alton, IL. Raymond served his country in the United States Navy from 1948 until 1952. He then went to work at Laclede Steel as an Electrician for 37 years. He was a member of Lovejoy United Presbyterian Church in Wood River, IL and the American Legion in Bethalto. Raymond enjoyed gardening, stargazing, reading, and taking walks and traveling with his wife, Gloria. He is survived by his wife, Gloria Hunt of Bethalto, IL; three children, Carol Kaufman (Albert) of Bethalto, IL, Raymond Leo Hunt III of Edwardsville, IL, and Tina McRae (Jeff) of Chatham, IL; six grandchildren, Michelle Douthat, Angela Kaufman, Brendan McRae, Sean McRae, Colton Willcut, and Ben Willcut; two great grandchildren, Amanda Douthat and Elizabeth Douthat; and a son-in-law, Brad Willcut. Along with his parents, he was preceded in death a daughter, Kathy Willcut; a son, Eric Hunt; a brother, Arnold Hunt; and two sisters, Maxine Nimmons and Marjorie Thery. Visitation will be on Monday, May 24, 2021 from 10:00 am until the time of service at 12:00 pm at the Elias Kallal and Schaaf Funeral Home in Bethalto, IL. Memorials may be made to Lovejoy United Presbyterian Church Online condolences and guest book may be found at www.eliaskallalandschaaf.com

The family of Raymond Leo Hunt Jr. created this Life Tributes page to make it easy to share your memories.

Send flowers to the Hunt family.