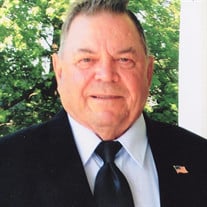 Dateline: Moro, IL Ralph O. Asbury, 86, of Moro, passed away on Thursday, December 3, 2020 at Alton Memorial Hospital. He was born in Rockwood, IL on January 7, 1934, the son of Roy and Mabel (Lorentz) Asbury. He married Dorothy Poenitske on May 28, 1955 in Perryville, MO. Ralph enlisted in the Illinois National Guard and was activated in the US Army, where he cooked for the military returning from the front lines during the Korean War. After 36 years he retired from Laclede Steel Co. He enjoyed camping and commercial fishing. He was an active member of Laclede Steel Retirees, Granite City SOAR (Steelworkers Organization of Active Retirees), and AFSCME Sub-chapter 59 (American Federation of State County and Municipal Employees), he enjoyed displaying political signs. He was a member of Chester, IL VFW, Bethalto American Legion, Granite City Eagles, and Wood River Moose. He also enjoyed cooking brats for the Alton Labor Picnic and preparing and cooking sausage for Zion Lutheran Sausage dinner. He with his wife have traveled to all 50 states and always loved traveling with his family. Surviving are his wife, Dorothy; three daughters, Kimberly (Robert) McLain of Jupiter, Florida, Gina (Rusty) Bazzell of Edwardsville, and Sandra Seymour of Bethalto; a son, Ralph Andrew (Janet) Asbury of Moro; ten grandchildren; eleven great-grandchildren; a brother, Russell Asbury ; and a sister, Evvie Osborn of Granite City. Preceding him in death were his parents; four brothers; a sister; a grandson; and a great-granddaughter. Visitation and funeral services will be private, with Pastor Kale Hansen officiating. Burial will take place at Rose Lawn Memory Gardens in Bethalto with Alton VFW Post 1308 performing Military Rites. Elias, Kallal and Schaaf Funeral Home in Bethalto is in charge of arrangements. Memorials can be made to Zion Lutheran School tuition fund.

The family of Ralph O. Asbury created this Life Tributes page to make it easy to share your memories.

Send flowers to the Asbury family.