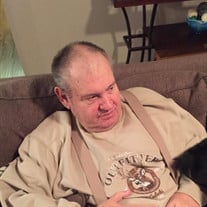 Peter “Tony” Anthony Ceppenati, 68, passed away at 2:15am Wednesday, February 18, 2021, at Jerseyville Manor. He was born on November 17, 1952, in Wood River, IL., the son of John Anthony and M. June (Smith) Ceppenati. Tony is survived by his mother, June Ceppenati of Godfrey, one brother, Larry Ceppenati (Rhonda Sheppard) of Godfrey, a sister and brother-in-law, Annette and Blake Pazero of Dow; two nieces, Nicole (Charlie) Griese and Danielle (Travis) Haun; two nephews, Blake Pazero and Guy Ceppenati and great nephews Colton Griese and Rhett Griese. He was preceded in death by his father, John Anthony Ceppenati, on Sept. 30, 2014 and a brother, John L. Ceppenati on March 4, 2015. Due to the COVID-19 pandemic, social distancing, occupancy, and mask wearing guidelines will be followed as mandated by the CDC. Visitation will be from 1pm until time of funeral service at 3pm on Saturday, February 20, 2021, at Elias, Kallal and Schaaf Funeral Home in Godfrey. Per the family’s wishes, cremation rites will be accorded. Memorials may be made to American Cancer Society or American Diabetes Association.

The family of Peter "Tony" Anthony Ceppenati created this Life Tributes page to make it easy to share your memories.

Send flowers to the Ceppenati family.