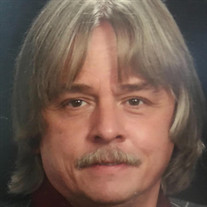 Paul W. Walters, age 64, of Alton, passed away Sunday, July 4, 2021 at St. Luke’s Hospital in Chesterfield, MO with his family by his side. He was born March 12, 1957 in Jerseyville, the son of Charles and Verna (Boker) Walters. He married Regina Strowmatt on May 11, 1991 in East Alton and she survives. Paul had worked at Olin Corp for many years. He was a member of Saints Peter Paul Catholic Church where he attended grade school. He then attended Alton High School before graduating from Marquette High School. Paul was passionate about music and enjoyed camping. In addition to his wife, Regina; he is survived by two children and their spouses, Charles and Ellen Walters of Wood River, and Amanda Walters and John Rogers of Augusta, MO; two brothers and their spouses, Matthew Walters of St. Louis, and Michael and Chris Walters of Godfrey; several step-siblings, Matty Holden, Brock and Linda Hohman, Chris Hohman, Michelle Hohman, John Hohman, Cam and Larry Wickenhauser, and Maria and Art Blair; his mother-in-law, Verna Strowmatt; three sisters-in law, Rosemary Sebastian, Marian Gillespie, and Glenna and Leroy Walsh; a special nephew, Kent Strowmatt; and many other nieces, nephews, great-nephews, cousins, and friends. He is preceded in death by his parents; his grandparents, Charles and Anna Walters; step-mother, Carolyn Walters; three siblings, Rosanne, Jimmy, and Christopher; a nephew, Andrew Walters; and two brothers-in-law, Carroll Strowmatt, and Doug Sebastian. Visitation will be held Thursday, July 8, 2021 from 4:00 pm until 8:00 pm at Elias, Kallal and Schaaf Funeral Home in Alton. Mass of Christian Burial will be held Friday, July 9, 2021, at 10:00 am at Our Lady Queen Of Peace Catholic Church in Bethalto with Fr. Tom Liebler officiating. Burial will take place in Rose Lawn Memory Gardens. In lieu of flowers, memorials may be made to Lewey Body/Benson Syndrome or to Lyme Disease Foundation.

The family of Paul W. Walters created this Life Tributes page to make it easy to share your memories.

Send flowers to the Walters family.