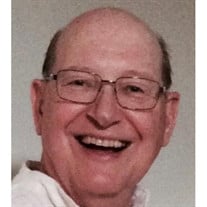 ALTON -- Paul Andrew Lagomarcino, age 80, of Alton, passed away peacefully after a long battle with cancer on November 10, 2021 at his residence with his family by his side. He was born on June 17, 1941 in Clinton, Iowa, the son of the late Richard and Nancy Lagomarcino. He is survived by his loving wife Suzanne of 57 years and his three loving children Debbie (Brad) San Luis Obispo, CA, Brian (Candy) Jonesboro, AR, and Natalie (Matt) Corte Madera, CA and six loving grandchildren: Lauren, Michael, Dylan, Atley, and Dakota and Siena. He is also survived by his brother Richard Lagomarcino in Deland, FL, and sister Nancy (Mimi) Roth in Torrance, CA and many nieces and nephews. Paul was a generous friend cherished for his warmth. He always left a person feeling more complete. Paul was raised in Tampa, FL, where he attended Jesuit High School. He earned his B.A. in Psychology and M.A. in Psychiatric Social Work from St. Louis University. Professionally, Paul was a well respected psychotherapist and family, marriage and divorce counselor for 40 years. Early in his career, he directed the Alton State Hospital Alcoholic Treatment Center and was a supervisor at the Madison County Mental Health Center. A true visionary in the mental health field, he founded the first Day Treatment Center in Alton, an intensive outpatient psychiatric program for the Metro East area. He also developed the first Police Mental Health Program/Employee Assistance Programs (EAP) in the entire area which helped policemen and their families manage the emotional stress related to the nature of their work. He cared deeply for his patients and was eager to help them. Paul retired after 40 years of private practice and then volunteered with St. Anthony's Hospice in Alton for the next nine years. Paul was truly a shining example of an unselfish person who always wanted to help others. Even a widow-maker heart attack many years ago couldn’t smother his huge heart. Paul was devoted to his family, showering them with affection and generosity. He cherished time with his wife, children, grandchildren, and extended family. Paul’s loyalty and unconditional love touched his family and friends. His crazy sense of humor and playful teasing entertained all who knew and loved him. Paul relished making others laugh through his antics, whether it was dancing in a tutu at a family reunion or falling out of a canoe fully clothed. His six grandchildren called him Papa Coolio, Papa No-Hair and SillyO! Love and laughter filled the room every time he was in it! Paul and Suzanne traveled extensively, visiting 39 countries, many of them with the Semester at Sea program. Paul proudly earned his pilot's license despite getting lost on his first solo flight. A sports and movie enthusiast, he loved watching television, and could explain in unending detail why it was good for his health. He will be greatly missed by his family, friends, and the community. Although are hearts are heavy, in keeping with Paul’s wishes, a prayer service was conducted with Paul and his family. A celebration of his life will be held at a later date. Elias, Kallal and Schaaf Funeral Homes are in charge of arrangements. Online condolences may be left for the family at https://www.eliaskallalandschaaf.com. Memorials may be made to BJC Hospice or a charity of your choice.

ALTON -- Paul Andrew Lagomarcino, age 80, of Alton, passed away peacefully after a long battle with cancer on November 10, 2021 at his residence with his family by his side. He was born on June 17, 1941 in Clinton, Iowa, the son of the late... View Obituary & Service Information

The family of Paul Andrew Lagomarcino created this Life Tributes page to make it easy to share your memories.

Send flowers to the Lagomarcino family.