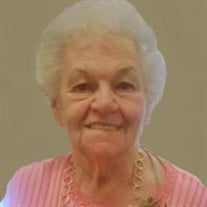 Dateline: Moro, Illinois Patsy J. Lansdon, 86, passed away at 7:35 pm on Saturday, February 27, 2021 at Alton Memorial Hospital. She was born on April 20, 1934 in Clarksville, MO, the daughter of Henry and Lucille (Harvey) Turnbeaugh. Patsy married Lyndle Lansdon on May 27, 1977 at the Bethalto Presbyterian Church where she was a member. Lyndle preceded her in death on January 4, 2004. Patsy worked as a Machinist for Olin Corporation and retired in 1995. Patsy is survived by four daughters, Deborah McDonald, Portia Gordon, Crystal Potter, and Lisa Wojciechowski; eleven grandchildren and ten great grandchildren; a sister-in-law, Sharon, Turnbeaugh. In addition to her husband and parents, she was also preceded in death by a brother, Meril Turnbeaugh, a sister, Ruth Starkey, and a son-in-law, Rodney McDonald. Graveside services will be held at 11 am Thursday, March 4, 2021 at the Rose Lawn Memory Gardens, Bethalto, Illinois. Memorials may be made to: Stray Rescue of St. Louis, MO.

The family of Patsy J. Landson created this Life Tributes page to make it easy to share your memories.

Send flowers to the Landson family.