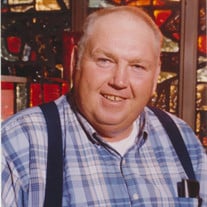 Dateline: Fosterburg, IL Patrick Joseph Maher, 75, of Fosterburg passed away on Sunday, January 10, 2021 at 11:50 am at his home surrounded by his family. He was born on March 6, 1945 the son of John Henry and Margaret Johanna (Rathgeb) Maher. On March 18, 1972 he married Freda Rae Card. She preceded him in death on October 13, 2015. Patrick retired from Azcon Scrap Corp in May of 2011. He was a lifetime farmer, farming his childhood farm. He was a long time member at St. Matthews Catholic Church until its closing, he then became a member at Our Lady Queen of Peace Church in Bethalto. He enjoyed spending time with his family and grandchildren. He is survived by his nine children, Karen Walch (Denny), Sarah Worlitz (David), Patrick R. Maher (Amy), Anthony Maher (Laura), Elizabeth Lamparter (Jason), Mark Maher (Rachel), Thomas Maher (Amanda), Christopher Maher, and Brian Maher (Heather); twenty- two grandchildren, Claudia, Greg, Pete and Steve Walch, Luke and Phillip Ramos, Katelyn, Lauren and Allison Maher, Samuel, Shane, and Henry Maher, Logan and Olivia Lamparter, Aidan Seemiller, Brady and Ashleigh Maher, Colin and Gibson Maher, and Levi, Ethan and Caleb Maher; a great grandson, Lane Maher, two sisters, Kathryn O’Brien- Luedde and Carolyn Crispi; and a brother, Bill Maher Sr. In addition to his parents and wife, he was preceded in death by a brother, Jack Maher; and two sisters, Margie Droste and Dorothy Meszaros. Visitation will be held on Friday, January 15, 2021 from 11:00 am until 12:00 pm at Our Lady Queen of Peace Catholic Church in Bethalto. A Mass of Christian burial will be Private. Burial will be held at Fosterburg Cemetery Memorials may be made to Alton Catholic Children’s Home or Our Lady Queen of Peace School in Bethalto.

Dateline: Fosterburg, IL Patrick Joseph Maher, 75, of Fosterburg passed away on Sunday, January 10, 2021 at 11:50 am at his home surrounded by his family. He was born on March 6, 1945 the son of John Henry and Margaret Johanna (Rathgeb)... View Obituary & Service Information

The family of Patrick Joseph Maher created this Life Tributes page to make it easy to share your memories.

Send flowers to the Maher family.