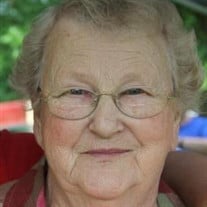 Dateline: Batchtown Oma Lee C. Longnecker, 96, passed away on Friday April 2, 2021 at Calhoun Nursing and Rehab with her family by her side. She was born on May 29, 1924 to the late Alvie and Sabina (McGee) Klaas. She married Rolland Longnecker,... View Obituary & Service Information

The family of Oma Lee C. Longnecker created this Life Tributes page to make it easy to share your memories.

Send flowers to the Longnecker family.