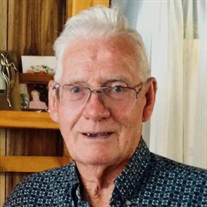 Norman (Sonny) Lee Harry Edwin Snyders went home to be with his Lord and Savior on January 27, 2022, at the age of eighty-seven. Sonny was the eldest son of the late Mildred Mary (nee Bussen) Snyders and Harry John Snyders, born on June 14, 1934, in Hardin, Illinois. Sonny is survived by his four siblings, Jack (Elaine) of Godfrey, IL, Gary (Gertrude) Meppen, IL, Shirley of Godfrey, IL and Robert of St. Louis, MO. His wife Alice (nee Blazier) Snyders and their four children, Judith Carol (Stan) of Warrenton, MO, Daniel Norman (Nancy) of Chatham, IL, Mary Kay of St. Louis, MO, and Christie Ann (Mark) of Troy, MO. He has nine grandchildren, thirteen great grandchildren and his first great great grandchild due to be born in June of 2022. Sonny and Alice married in Virginia, IL on February 25, 1952, and would have celebrated their 70th, wedding anniversary next month. Sonny was a farmer for many years working along side his dad on the family farm. Later he worked as a carpenter in St. Louis, MO and around the Calhoun County area. Sonny was a dedicated husband and father and worked extremely hard all his life to take care of his family. He built the house that he and Alice lived in and raised all four of their children. Sonny leaves a wonderful legacy of love, life and faith to his family which will be thought about and practiced for many years to come. Visitation will be at the Hanks Kallal and Schaaf Funeral home in Hardin, IL on Friday February 11, 2022, from 4pm to 7pm. A Catholic funeral Mass will be celebrated at St. Joseph’s church on February 12, 2022, at 10am. Following Sonny will be buried at St. Joseph’s church cemetery in Meppen, IL. In lieu of flowers the family is requesting memorials be made to Calhoun Nursing and Rehab Activities Department or Calhoun Entertainment Company. The family would like to express how grateful they are for the wonderful care Sonny received while at Calhoun Nursing and Rehab. The staff took care of Sonny like he was one of their family members.

Norman (Sonny) Lee Harry Edwin Snyders went home to be with his Lord and Savior on January 27, 2022, at the age of eighty-seven. Sonny was the eldest son of the late Mildred Mary (nee Bussen) Snyders and Harry John Snyders, born on June 14,... View Obituary & Service Information

The family of Norman "Sonny" Lee Harry Edwin Snyders created this Life Tributes page to make it easy to share your memories.

Norman (Sonny) Lee Harry Edwin Snyders went home to be with his...

Send flowers to the Snyders family.