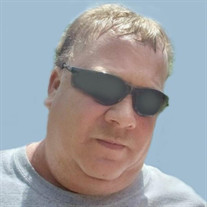 Dateline: Delhi Michael “Mike” W. Perkinson, 47, of Godfrey, passed away on Wednesday, September 8, 2021. He was born on July 9, 1974, in Carrollton, IL, the son of Chet A. and Vickie L. (Brueggeman) Perkinson. He married Christina “Christi” M. Kallal on October 11, 2003, at the Hope Lutheran Church in Jerseyville. Mike was a member of Zion Lutheran Church in Shipman, IL, and was formerly employed as a plumber for DNP of Staunton. He enjoyed tinkering in the garage, cooking, woodworking, gardening, and could fix anything. He devoted most of his time to his family, especially his two girls. He loved his family, watching football and NASCAR and going on family trips. He is survived by his mother, Vickie; his wife, Christi; his daughters, Katie and Keira Perkinson; father and mother-in-law, Gary and Janet Kallal; brother and sister-in-law, Tim and Sandy Kallal; two nephews, Dillon and Alex; a niece, Isabella; and numerous aunts, uncles, cousins and friends. Along with his father, Chet, he was preceded in death by his maternal grandfather, Gene Brueggeman, and paternal grandparents, Charles and Sharon Perkinson. Visitation will be on Tuesday, September 14, 2021, from 4 pm until 7 pm at Crawford Funeral Home in Jerseyville. Funeral services will be held on Wednesday, September 15, 2021, at 10 am at Zion Lutheran Church in Shipman, Pastor John Lottes will officiate. Burial will follow at Shipman City Cemetery. Elias, Kallal and Schaaf Funeral Home in Bethalto is in charge of arrangements. Memorials can be made to a college fund for his daughters, Katie and Keira. Online condolences and guest book may be found at www.eliaskallalandschaaf.com

The family of Michael "Mike" W. Perkinson created this Life Tributes page to make it easy to share your memories.

Send flowers to the Perkinson family.