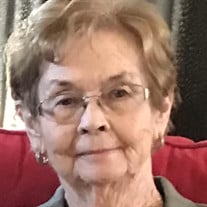 Dateline: Godfrey Mary Jo Ducey, age 90, passed away Friday, February 5, 2021 at 8:26 am at Asbury Village in Godfrey. She was born March 24, 1930 in Jerseyville, IL the daughter of Charles and Mary (Dougherty) Hembrow. She attended a one-room country school near Medora, IL. She graduated from Medora High School. Later, she earned her Bachelor and Master’s Degrees from Southern Illinois University in Edwardsville, IL. Mary Jo was a teacher for the Alton Public Schools for 27 years. After retirement, she worked as a tutor for students learning English as their second language. She was a member of St. Mary’s Catholic Church in Alton, IL. She found enjoyment in spending time with her family, playing golf, traveling, playing bridge and mastering puzzles. She is survived by her loving husband, Robert Joseph Ducey, whom she married in 1985 in Jerseyville. In addition to her husband, she is survived by three daughters and their spouses: Cynthia and David Moore of Alton, Sandra and Rick Saunders of Norfolk, VA, and Traci Hahn and Suzan Pickels of Houston, TX; her step-children, Joe and Kathy Ducey of Phoenix, AZ, Meg and Pat Miller of Alton, Timm and Jean Ducey of Kirkwood, MO, Ellen and Peter Tassinari of Alton, and John and Tracy Ducey of Godfrey; 19 grandchildren, 7 great-grandchildren and 1 great-great grandchild. She is preceded in death by her parents, a brother and sister-in-law, John “Jack” and Jackie Hembrow, and her brother, Fr. William Hembrow. Per her request, her remains have been donated to St. Louis University School of Medicine and Research. A Memorial Mass will be held on Saturday, July 10, 2021 at 10:00 am to Celebrate her life and her grandsons’ life, Timothy at St. Mary’s Catholic Church in Alton. Memorials may be made to Marquette High School or St. Mary’s School. Elias, Kallal and Schaaf Funeral Home in Alton is in charge of arrangements.

Dateline: Godfrey Mary Jo Ducey, age 90, passed away Friday, February 5, 2021 at 8:26 am at Asbury Village in Godfrey. She was born March 24, 1930 in Jerseyville, IL the daughter of Charles and Mary (Dougherty) Hembrow. She attended a one-room... View Obituary & Service Information

The family of Mary Jo Ducey created this Life Tributes page to make it easy to share your memories.

Send flowers to the Ducey family.