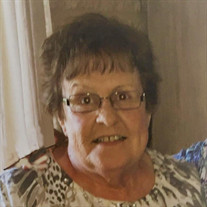 Dateline: Bethalto Mary L. Hausman, 77, of Bethalto, Illinois, passed away on Thursday, January 20, 2022, at Alton Memorial Hospital. She was born on September 6, 1944, in Riplinger, Wisconsin, the daughter of William and Myrtle (Brown) Gaetz. She married Ronald M. Hausman on September 23, 1962, in Riplinger, Wisconsin. He preceded her in death on June 13, 2012. Mary was a constant caretaker, raising her 2 sons, and helping with her grandchildren. In addition to spending time with her family, she enjoyed puzzles, dice, and Skip-Bo. Mary is survived by her two sons, Keith (Sheila) Hausman, of Bethalto, and Brian (Brook) Hausman, of Godfrey; four grandchildren, Garrett (Wendy) Hausman, Rebecca (Drew Buettner) Hausman, Logan Hausman, and Lauren Puccini; and three siblings, Janice Schoelzel, Carol (Dennis) Kuehling, and David Gaetz. Along with her parents and husband, Ron, she was preceded in death by her sister, Joanne Laper, and her brother, Ralph Gaetz. Visitation will be held on Monday, January 24, 2022, from 1:30 pm until time of service at 2:00 pm, at Elias, Kallal and Schaaf Funeral Home in Bethalto. Pastor Kale Hanson will officiate.

The family of Mary L Hausman created this Life Tributes page to make it easy to share your memories.

Send flowers to the Hausman family.