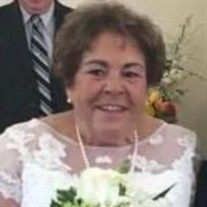 Dateline: Moro, IL Mary Robien Hallowell Belt, passed away peacefully at home, surrounded by family, on Wednesday, June 1, 2022. She was born in Collinsville, IL, on January 15, 1945, to Mr. and Mrs. Elmer Robien. She was blessed to spend the last 7 years with Robert Belt, who she called "the love of her life". They were married on October 19, 2016 in Wood River, IL. He converted her into an avid Cardinals fan and they never missed a game! They enjoyed getting out, spending time with friends and just being together regardless of what they were doing. Mary was a giving, nurturing wife and mother who spent her life caring for others. She was a role model for her daughters and a loving grandma to her grandsons. She was always the life of the party and brought smiles and laughter to anyone who spent time with her. She easily made lifelong friends in every facet of her life. She loved to travel and spent many summers at the beach with family and friends. She especially loved Christmas, making each year a special occasion for the family; but she never missed the opportunity to dress up in her witch costume for Halloween! Mary was fearless and driven, putting herself through nursing school which led to a successful 30-year career in the medical field. Early in her career, she became the Head Nurse of Pediatrics at Orlando Regional Medical Center, leading her to become a pioneer for pediatric home healthcare services in Florida. She continued her nursing career in behavioral health until retirement. Her laughter, nurturing, and generous spirit will be sorely missed by her family and friends. She is survived by her husband, Robert; her daughter Cynthia Hallowell Shankle and husband AJ Shankle of Crystal Lake, IL, and daughter Amy Hallowell of Bethalto, IL; brother Gerald Robien and his wife Elaine, and brother Dan Robien and his wife Cindy; brother-in-law John Belt and his wife Marlene; sister-in-law Rita Crump; and grandsons Matt Hallowell and Braydon Eldridge. Along with her parents, she was preceded in death by first husband of 40 years, William Hallowell Jr. A memorial service will be held at a later date. In lieu of flowers, the family asks for donations to St Judes Children’s Hospital, a charity that held a special place in Mary's heart. Online condolences and guest book may be found at www.eliaskallalandschaaf.com

Dateline: Moro, IL Mary Robien Hallowell Belt, passed away peacefully at home, surrounded by family, on Wednesday, June 1, 2022. She was born in Collinsville, IL, on January 15, 1945, to Mr. and Mrs. Elmer Robien. She was blessed to spend the... View Obituary & Service Information

The family of Mary Robien Hallowell Belt created this Life Tributes page to make it easy to share your memories.