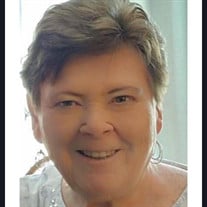 Martha Louise “Marti” (Laughlin) Keller, 79 of Alton, passed away unexpectedly at home Friday, August 6, 2021. Marti was a firecracker baby, born in Alton on July 4, 1942, the daughter of Bill and Agnes ‘Sis’ (Plumb) Laughlin. On September 9, 1977, she married William A. ‘Bill’ Keller III. Marti was a lover of life – she didn’t know a stranger and was the life of the party. She was a big fan of holidays, especially St. Patrick’s Day, Independence Day (her birthday!), Christmas, Easter, Thanksgiving – any time her family and friends could gather, she celebrated! After working as an office manager at various area automobile dealerships for 45+ years, she retired for a brief time. But the slow pace of retired life didn’t suit her and in 2011, she began working as a receptionist at Asbury Village until the day of her death. Marti had several hobbies, including softball in her younger years and golf in her later years, as well as cheering on her kids and grandkids at their sporting events. Her home away from home, however, was the bowling alley. She was a 600-club member, bowling in multiple leagues and tournaments around the country. She was also an active information desk volunteer with OSF Saint Anthony’s Health Center and an office & Oktoberfest volunteer at St. Mary’s Catholic Church. She is survived by her husband, Bill; five children, Diane (Mike) Schuette, Jenny (Paul) Yost, Jim (Amber) Keller, Patrick Ruby and Tony Keller; 16 grandchildren; 15 great grandchildren; 19 nieces and nephews; many cousins; sister-in-law, Jeannie Bailey, and brother-in-law, Jack (Joan) Keller. Her seven surviving siblings include Phyllis (Chuck) Farina, Debbie (Bill) Haynes, Jeanie (Ron) Ansell, Bill Laughlin, John (Diane) Laughlin, Terri (Dan) Beiser, Sam Laughlin. She was preceded in death by her parents, an infant sister, Nancy, and her older sister, Joyce. Visitation will be held on Tuesday, August 10, 2021 from 4 to 7 pm at Elias, Kallal and Schaaf Funeral Home in Godfrey. The funeral mass will be at St. Mary’s Catholic Church on Wednesday, August 11 at 10 am. Father Paul Nguyen will officiate. Burial will follow at St. Joseph’s Cemetery in Alton. Memorials may be made to Marquette Catholic High School, St. Mary’s Catholic Church, OSF Foundation or a charity of one’s choice.

The family of Martha "Marti" Keller created this Life Tributes page to make it easy to share your memories.

Send flowers to the Keller family.