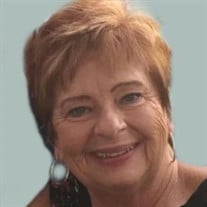 Dateline: Bethalto On Saturday, November 13, 2021, at 10 am, Martha Louise (Klein) Smith, surrounded by her family, returned to her heavenly eternity with God. Martha was born in Bethalto, IL on October 10, 1949, to Marian (Broderick) and Robert Klein, who preceded her in death. She was a true Bethalto girl to the core. Her pride as an Eagle fan started early on as a 1967 graduate of Civic Memorial High School and continued on as she enjoyed supporting her two sons in Eagles Athletics. Martha’s pride in Bethalto compelled her to serve in multiple facets of the community. In 1967, she began as a bank teller at Bethalto National Bank and worked her way to Vice-President of the Bethalto branch of 1st National Bank of Staunton. She also spent countless hours with her parents and older sister Mary Ann running the Bethalto landmark Klein’s Store. Martha’s public service to Bethalto continued as a Village Trustee and City Clerk. She also found time to volunteer for the Boys and Girls Club of Bethalto and the Community Hope Center. In 1973, Martha danced her way into the heart of her future husband, Dan Smith. Martha and Dan were joined in holy matrimony on October 11, 1975, at Our Lady Queen of Peace Catholic Church. They had two sons, Nick and Corey Smith, who were her pride and joy. Family always was a priority and taking family trips was one of her favorite activities. For over 25 years, the family vacationed in Destin, FL and then another 10 years were spent going to Key West. No matter the destination, the trips were filled with soaking in the sun, laughs and memorable stories that were retold throughout the years. Martha’s Catholic faith was always at the very core of her being and how she lived her life every day. She was a lifelong member of Our Lady Queen of Peace Catholic Church in Bethalto. She was an active church member, especially on the Finance Committee and as a Church Trustee. Martha also served as a Board Member of Catholic Charities. Martha is survived by her husband, Dan Smith, son and daughter-in-law Nick and Alyssa Smith of Bethalto, son Corey Smith of Alton, as well as her sister and brother-in-law Mary Ann and Gene Magac of Holiday Shores. She is leaving behind so many others that she loved with all her heart. Visitation will be held on Wednesday, November 17 from 4-7 pm at Elias, Kallal and Schaaf Funeral Home in Bethalto. A funeral mass will be held on Thursday, November 18 at 10 am at Our Lady Queen of Peace in Bethalto. Charitable donations can be made to the OLQP Charitable Foundation or Catholic Charities. Online condolences and guest book may be found at www.eliaskallalandschaaf.com

Dateline: Bethalto On Saturday, November 13, 2021, at 10 am, Martha Louise (Klein) Smith, surrounded by her family, returned to her heavenly eternity with God. Martha was born in Bethalto, IL on October 10, 1949, to Marian (Broderick) and... View Obituary & Service Information

The family of Martha Louise (Klein) Smith created this Life Tributes page to make it easy to share your memories.