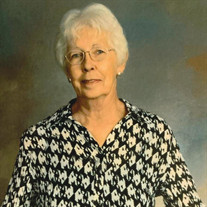 Marlys L. Fitzgerald, 84, passed away at 9:37 am Saturday, January 9, 2021 at home with her family and friends by her side. She was born on April 1, 1936 in Wayne City, Illinois, the daughter of Andrew "Jack" & Mae (Davis) Henson. Marlys married Everett L. Fitzgerald on November 27, 1965 at Calvary Baptist Church in Alton. He preceded her in death on November 14, 1993. She graduated from Wayne City High School, in Wayne City, IL in 1954. Marlys continued her education at St. Joseph's School of Nursing in Alton, IL where she graduated in 1957. In the early years of her career, she worked at St. Joseph's Hospital and then went on to continue her career in Nursing at St. Anthony's. Most of her career was spent in the OR Department where she retired as the Director of Surgery in December of 2001. The OR Department members were loved dearly by her and she loved them as her second family. Marlys was a member of Calvary Baptist Church since 1976. She enjoyed the fellowship of the other church members and her Bible Study Group. She enjoyed traveling with her friends, attending Alton Little Theater performances, and especially spending time with her family. Her grandchildren were the center of her life. Andrew and Jillian were truly blessed to have her as a grandmother. Even after retirement, Marlys continued to be service focused where she maintained continuing education courses with the American Cancer Center Society. Marlys had a love and fascination for horses that stemmed from growing up on a farm and having horses of her own. As an adult, this love for horses evolved into being an avid fan of the Kentucky Derby and the rich history of the Triple Crown Races. Marlys has always been a beacon of inspiration and hope. She did not ask anyone to do something that she would not do herself, dedicating her whole life to caring for others with little regard for recognition. Her steadfast and unwavering commitment to others were the pinnacles of her life. She has been a blessing and an inspiration to all. She is survived by her daughter and son-in-law, Lisa "Diane" (Fitzgerald) & Brad Nelson; two grandchildren, Andrew Nelson of Godfrey, and Jillian Nelson of Godfrey; two cousins, Wayne Henson of Bethalto and Carl Henson of Golconda, IL. Due to the COVID-19 pandemic, social distancing, occupancy, and mask wearing guidelines will be followed as mandated by the CDC. A private visitation for family will be held Friday, January 15, 2021 at Elias, Kallal and Schaaf Funeral Home in Godfrey. Friends are welcome from 9 am until the time of funeral services at 10:30 am on Saturday, January 16, 2021 at Calvary Baptist Church in Alton. Reverend Andre’ Dobson will officiate. Burial will follow at Valhalla Memorial Park in Godfrey. Memorials may be made to Marquette Catholic High School, OSF St. Anthony's Hospice or OSF Moeller Cancer Center

The family of Marlys L Fitzgerald created this Life Tributes page to make it easy to share your memories.

Send flowers to the Fitzgerald family.